SPREADING THE GOSPEL OF BOOKS ESSAE M. CULVER AND THE GENESIS OF LOUISIANA PARISH LIBRARIES       By FLORENCE M. JUMONVILLE      2019 - 272 Pages 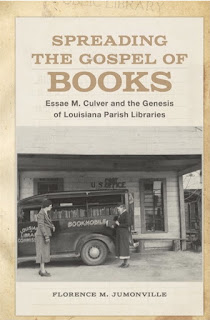 SPREADING THE GOSPEL OF BOOKS ESSAE M. CULVER AND THE GENESIS OF LOUISIANA PARISH LIBRARIES       By FLORENCE M. JUMONVILLE      2019 - 272 Pages

This is an account of how a system of Public Libraries started and developed in state of Louisiana. Funded by The Carnegie Foundation in 1925 a California librarian Essae Culver, moved there,  for three years..  Her mission was to develop publically funded parish libraries.  She ended up staying in Louisiana for fifty years.  By 1969 there was a library  in all 64 parrishes (Countries) in the state. 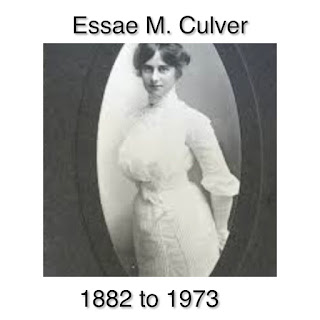 In 1926 Lousianna had the highest rate of illiteracy in USA, at 37 percent.  African Americans were totally discriminated against.  Culver was faced with establishing libraries for Whites and another set for Blacks, about forty percent of the population. Jumonville explains in detail how Culver accomplished so much.  The state was very poor and times were very rough during The Great Depression Era of 1929 to 1940. Roads were poor, some areas could be reached only by boat.  Every parrish had a local government in charge of funds who had to be persuaded to fund a library.

It was very interesting to learn what sorts of books people wanted.  We learn about book mobiles on trucks, prison libraries, and much more.  We encounter some colorful characters even Huey Long who was a big supporter of Public libraries.  The system started

by Culver was used as a model in other states and was even studied by foreign govrernments.she helped pioneer library education in state colleges .  She never married or had children.  She was totally dedicated to her work.

I reside in a mega City of Twenty Million.  There are  ultra luxurious gated communities, very chic malls, and huge dangerous slums.  There are no Public Libraries.  I salute ESSAE M. CULVER .  It is too  bad the Carnegie Foundation never extended their Mission  to The Phillippines.  It would have made a huge difference in millions of lives.

The book is priced at $47.50 for The Kindle Edition and $50.00 for The Hard Bound.  I enjoyed this book which I was given as a DRC.  However, I cannot in good consciousness endorse the purchase of this book at that price to most General readers