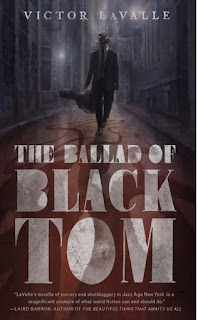 Winner of the 2016 Shirley Jackson Prize

Runner up for the Hugo, Nebula, World Fantasy and Bram Stoker Award

Set in Harlem in the 1920s the 1920s (Harlem at that time was the section of New York City where most African Americans lived).  Prejudice against African Americans, then called “negroes”, was open, socially acceptable and pervasive among white New Yorkers.  The central character in the story is a Charles Thomas Tester, 21.  He and his father have an apartment in Harlem.  Charles supports his disabled father by playing his guitar and singing (both of which he stinks at) and whatever hustles he can come up with.

As the plot opens he has a very well paying job lined up, delivering a book of occult spells to an elderly white woman with a reputation as a sorceress.   He has to travel on the subway far from Harlem into all white areas.  He has learned to look down, carry a guitar so as not to scare white people.  The Ballad of Black Tom is very much in the tradition of the American horror master H. P. Lovecraft.  Lovecraft was a racist and xenophobic giving an extra irony to the mood of the book.

Charles meets a very rich strange elderly eccentric with whom he becomes heavily involved.  Reality changes before his eyes.  In a police killing right out of today’s news from America, the police enter his house, see his father with a guitar and open fire, assuming it is a machine gun.

Charles begins to gain occult powers, learning deep secrets.  There are lots of interesting things in the novel.  A picture of what it might have been like to be a young African American man in New York City in the 1920s, H. P. Lovecraft style, emerges.

The Ballad of Black Tom was a fun fast read I greatly enjoyed.

I added Lavalle’s other books to my Amazon wish list.  This book is on sale for $0.99 as a kindle.

See Victorlavalle.com for data on the author 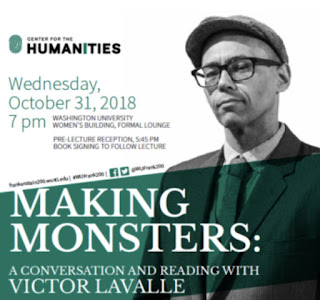 This is on my TBR as well: I'm glad to hear you enjoyed it so much. It reminds me of the new HBO show I've been watching, a retelling/reenvisioning of Lovecraft, called Lovecraft Country.