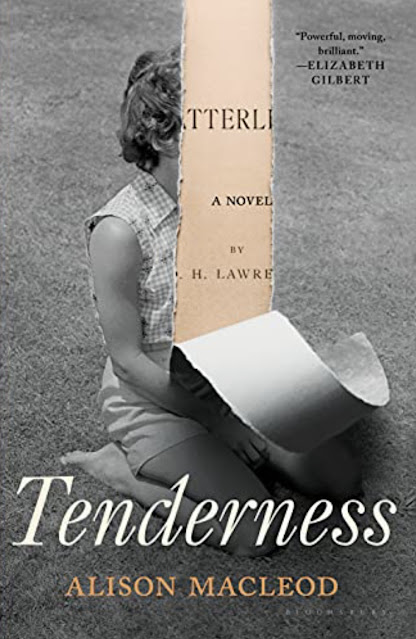 Gateway to Alison MacLeod on The Reading Life

I  loved this book.  Earlier in 2021 I read two novels I regarded as great works of art, Lolita by Vladimir Nabokov and The Master and Margarita by Mikhail Bulgakov. I am very glad to close 2021 adding Tenderness by Alison MacLeod to this list

Experiencing Tenderness by Alison MacLeod was for me a very elevating life affirming way to close out a year most will be glad to see over.

The central focus of Tenderness develops out of the struggles of D. H. Lawrence to turn his life experiences into Lady Chatterly’s Lover and the long fight to get the novel published in England where the publisher, Penguin Press,was  criminally charged with publishing an obscene book.  This occurred in 1960 when Penquin  had printed 200,000 copies of an affordable paperback edition.  The government prosecutors claimed the book would potentially corrupt young readers, especially women and servants, a throw back to an older time from the Lordly Prosecutors.

There are several intertwined plot lines. MacLeod brings us deeply into the soul of Lawrence.  He knows he is very sick with probably little time left.  We see his struggles with his wife Frieda, the friends who provide them shelter and his own inner demons.

MacLeod made me feel I was at the London trial.  The defense brings in numerous expert witnesses including E. M. Forester, at 85 the best known then living English novelist, to testify in defense of the novel.  The diverse defense witnesses portray the novel not as an attack on the  solemnity of marriage but as a defense of true love.  Hoover did his best to bring in witnesses favorable to prosecution.

J. Edgar Hoover was director of the Federal Bureau of Investigation from 1935 until his death in 1972.  Hoover kept extensive secret files documenting sexual improprieties of highly placed Americans he could use as political blackmail should his position ever be threatened. At the time of the English trial, homosexuality was against the law in America.  Extra marital sex was treated as a horrible scandal.  In a deep irony, history has shown us that Hoover was a closeted gay in long term relationship with his second in command at the FBI.  He was very concerned that American communists, backed by Russia, were trying to destroy the moral fiber of Americans by helping bringing back into print Lady Chatterly’s Lover.  Hoover was appalled by the language and the open depiction of sex between Lady Chatterly and the estate gardener. Her husband had been crippled from the waist down in World War One.  The novel presents an England itself crippled in spirit by the war.

MacLeod treats Hoover as  very against the presidential candidate John F. Kennedy, running against Richard Nixon in 1960. He had extensive documentation on the sex life of Kennedy and Kennedy’s wealthy father.  He dispatched an agent to spy on Jacqueline Kennedy. He photographed her with a copy of Lady Chatterly’s Lover. Hoover thought the American Public would be horrified by this and planned to leak the pictures to pro-Nixon newspapers.  The agent involved has a significant plot line dedicated to his career at the FBI.  Included is a fascinating creation of a conversation between Lionel Trilling, author of The Liberal Imagination, and Mrs. Kennedy

The prose is exquiste, there are so many delighful minors characters.  As I read this segment I wished so much I could have been Sir Stephen in another Life.

“Sir Stephen had been a first-rate classicist at Cambridge, and was a distinguished eccentric. He was known, for example, to wear a hair-net when he played tennis, and he hosted a dining club to which all members – men, naturally – were required to wear purple dinner jackets with lilac silk lining. He owned numerous Siamese cats; it was difficult, by all accounts, to keep them off the table or out of his guests’

laps when they dined. He was mad about bridge and shooting, and had tutored Queen Victoria’s grandson. Sir Stephen was, in short, an editor, a bibliographer, a renowned librarian, a speaker of ancient Coptic, and a lover of church vestments, rare books – and vodka. Crucially, he was also Keeper of the Papers at the Foreign Office. That was crucial because, in 1929, he ‘transported’ two copies of Lady Chatterley out of Italy.”

The Siamese cats: I get it now. No wonder you wanted to be Sir Stephen! But probably not the "shooting" part and maybe not the card games either? LOL I love the cover of this, and I've enjoyed her stories too. Well, plus, your recommendation of COURSE!