The Last Bookstore in London by Madeline Martin - 2021 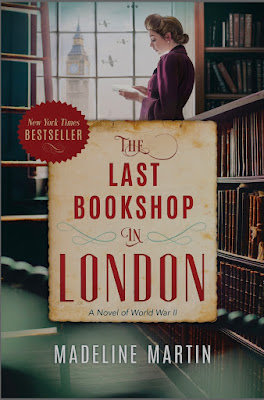 The Last Bookstore in London by Madeline Martin - 2021

On a personal note, at age 22 my uncle Melvin Ramsey was killed defending London in a fighter plane. He was an American but before the USA joined the war, he signed up for the Canadian Air Force. When in London I looked for his grave but could not find it.  I never met him. His loss hurt my mother and grandmother terribly.

As the work begins, just before Germany starts World War Two, Grace Bennett, along with her best friend Viv, realize their dream of escaping the provinces and moving  to London where they will live with her late mother’s best friend, Mrs Weatherford.  Grace worked in her uncle’s store and hated it.

In order to get a job in London one had to have a letter of recommendation from a prior employer. Grace’s uncle refused to give her one. Viv had forged her self a letter but Grace’s integrity made her refuse this.  Viv got a job at the highly prestigious department London department store, Harrods, where Mrs Weatherford’s son worked. Mrs Weatherford gets Grace a job at a bookstore where after six months she can get a letter to get a job at Harrods along with Viv and Colin, Mrs Weatherford’s only child.  Grace has never had time for reading and at first feels totally out of place at Primrose Books.

The owner is very cantankerous, being short with Grace and giving her little direction.  The shop is a disorganized mess. Grace makes it her mission to organize the shop, making it a pleasant place where people will want to shop.  Soon she has transformed the shop.

War is declared.  A handsome customer, George, talks to Grace about the magic of reading.  Just before leaving for the war he gives her a copy of The Count of Monte Cristo.  After a few months, the blitz bombing of London begins.  Grace volunteers three nights a week as an air raid warden. Grace begins to love reading. She reads from classics like Middlemarch to others sheltering in tube stations with her.

The horror and terror of the blitz gets worse and worse but the English are not beaten down.  We see the impact of rationing on Mrs Weatherford’s cooking, she converts her flower garden to a “victory” vegetable garden.

Grace and the book store owner become very close as he opens up to her.

Tragic things do happen.  I found this book very moving and uplifting.  If London can survive the Blitz, it  can survive the pandemic.  I loved the close of the book.  Some on Goodreads have said the book is “too romantic” for them.

She lives in sunny Florida with her two daughters (known collectively as the minions), one incredibly spoiled cat and a man so wonderful he's been dubbed Mr. Awesome. She is a die-hard history lover who will happily lose herself in research any day. When she's not writing, researching or 'moming', you can find her spending time with her family at Disney or sneaking a couple spoonfuls of Nutella while laughing over cat videos. She also loves research and travel, attributing her fascination with history to having spent most of her childhood as an Army brat in Germany.”

this sounds like a terrific read! i'm off to Abebooks to order a copy! tx!

I found your review through Carole's Chatter. This book sounds very interesting. Reminds me a little of 84, Charing Cross Road but only because of the topic of no more bookshops during the war.