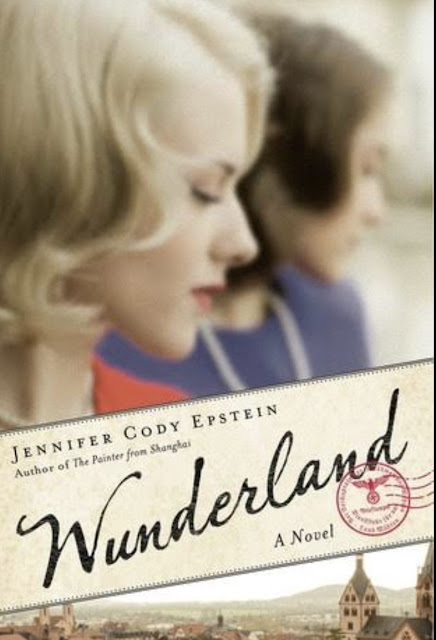 Last month I read The Painter from Shanghai: A Novel by Jennifer Cody Epstein.  I added her two other novels to my Amazon wish list.  When Wunderland was marked down fifty percent, as a Kindle, I happily acquired it.  Set largely in Germany,  Wunderland centers around the impact  of the Holocaust on three women. Ava Fisher and her mother Ilsa have never been close.   Renete, Ilse’s very close friend when they were growing up, is the third.

Ilse and Renete grew up very close. Hitler has come to power, Ilse joins Hitler youth organizations and begins to write articles about how Jews were destroying Germany.  Through a series of revelations Renete discovers her mother has kept secret their Jewish ancestry.  Epstein vividly portrays how both girls lives are impacted by the Nuremburg laws, the Gestapo.  Things were never easy between Ava and her mother Ilse, supposedly her father had been killed on the Eastern Front.  Terrible attacks on Jews are depicted.

Once Renete’s ancestory comes out, it changes everything.   We see the pervasive way German Society is destroyed.

The narrative moves from Germany in 1936 to New York City in the 1980s.  There are lots of delightful literary references including a number to a German translation of Alice in Wonderland.

“I am the author of the USA Today bestseller Wunderland, now out in paperback. My prior works include The Gods of Heavenly Punishment, winner of the 2014 Asian Pacific Association of Librarians Honor award for outstanding fiction, as well as the international bestseller The Painter from Shanghai. I have also written for The Wall Street Journal, The Asian Wall Street Journal, The Nation (Thailand), Self and Mademoiselle magazines, and the NBC and HBO networks, working in Kyoto, Tokyo, Hong Kong and Bangkok as well as Washington D.C. and New York. I’ve taught at Columbia University in New York and Doshisha University in Kyoto, and have an MFA from Columbia, a Masters of International Relations from the Johns Hopkins School of Advanced International Studies, and a BA in Asian Studies/English from Amherst College.

I currently live in Brooklyn, NY with my husband, filmmaker Michael Epstein, my two amazing daughters and an exceptionally needy Springer Spaniel.”

I hope to read The Gods of Heavenly Punishment, set in Japan during World War Two, soon.