The cultural impact of Bram Stoker's Dracula  (1897) is just huge!    Vampires are one of the dominant images of world culture.   Stoker (1847 to 1912-Dublin) did not originate the myth of the vampire but it is to him we owe its power and shape.

I have no idea when I first heard of the myth of Dracula.   I am sure it was many years before I knew there was a book by that name written by a man named Bram Stoker from Dublin.   I first read his work in association with Irish Short Story Week Year One when I  posted  on one of his excellent short stories "The Gypsey Prophecy".

I am so glad I have at last read Dracula.   I liked it much more than I thought I would.    I especially liked how Stoker tells the story through a fascinating mix of letters, diary entries, ship logs and occasional newspaper clippings.   Of course I have seen several version of the Dracula story on old movies on TV.    The book has a lot of Gothic Horror cliches but that is just because the book created the cliches in the first place. 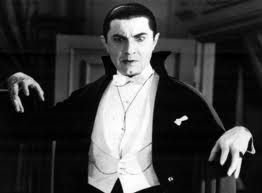 Once I began to read the book it was as though I was meeting old friends.   There is the good Professor Abraham Van Helsing learned in vampire lore who is at first reluctant to voice his thoughts for fear he will seem deranged.   There is the beautiful young virginal Lucy with the mysterious bites who has fallen into a mysterious coma like state.   We meet the disgusting insect eating Renfield who I for sure recall from the movies.   We meet the required attorney who travels to Transylvania to visit Count Dracula at his sinister castle deep in the Carpathian mountains.   At first the attorney is intimidated by the seemingly great wealth and culture of the Count, but he quickly realizes something is badly wrong.   Why does the wealthy Count Dracula have no servants?    Who are the three very evil looking women he encounters in the castle?   Where does Dracula disappear to during the day time and in a great scene he wonders how he can seemingly climb the interior walls of the castle.  I cannot see Dracula as any body but Bella Lugosi.

Even though I pretty much knew what was going to happen Stoker does such a great job with the narration that I was kept very interested throughout.   Stoker does a wonderful job in creating the atmosphere.   The sea voyages to and from England to continental Europe are really wonderful.   You can feel the pervasive miasma of terror on the ships.

I read this book via Dailylit.com in 176 episodes.     You can download it (along with a number of his short stories) in a Kindle, Pdf or other format from Manybooks, a great source of free books.

If you want to participate in Irish Short Story Week Year II coming up in March 2012 you might enjoy reading one of Stoker's many short stories.


Dracula may be an over one hundred year old book but it not dull, stuffy, or boring at all.

I recently read Dracula too. I really enjoyed the book's structure. I was fascinated with how Stoker used voice and which characters he gave that power to and why. I already knew what was going to happen so I was much more interested in the psychology and gender studies aspect of the book.

I read this classic many years ago and, coincidentally, almost picked it up from a secondhand bookshop this evening except it was a Puffin Classics edition and the cover image put me off. Instead, I settled for a Jonathan Kellerman {Dr. DEATH) and Colin Dexter (THE SILENT WORLD OF NICHOLAS QUINN).

I just read this one last year and I hadn't realized it was written mostly in letters, so that was a great surprise (love that device!). And I agree that the atmosphere was stunning...I was expecting it to be a bit cheezy, but it was grand. (Thanks for the reminder about Irish short story week; I didn't find out about it in time to shuffle my reading plans last year, but I will definitely do so for this March!)

Isn't it just wonderful to go to the source? To begin at the beginning? You've convinced me to read it, even though I have no interest in vampires. :<) My daughter, however is wild for all the new literature and tv concerning them, and I think I'll get her a copy for Christmas so she can see where it all started. Thank you so much for this. And I do want to join the Irish Short Story week!

Read this years ago & recall enjoying it, have recently read a book that's described as an alternate history of this book & it's time frame "Anno Dracula" by Kim Newman, this was an entertaining very clever postmodern take on this tale. Which I thoroughly enjoyed & hope to post on soon.

You are right about things seeming cliche now because Stoker created the cliches. When I first read it I wanted to shake Jonathan for not realising the Count was a vampire, when we already knew he was very pale and had extended fang teeth!

Dracula is one of my favourite books, I'm glad you enjoyed it :)

Mel, I really should read this classic. Excellent review! It's wonderful when you enjoy a book even more than you thought you would.

Dracula has been on my TBR pile literally for years, I never seem in the right mood for it. Thanks for reminding me why I want to read it though!

Dracula got me interested in the East European countries, with their old world castles surrounded by fog, their gloomy and sinister demeanor :)

Have you read 'The Historian' by Elizabeth Kostova, an interesting read about the quest for Dracula. Spine chilling in parts and a generally engrossing read as a whole.

I cannot remember whether I read the original Dracula. I definitely read a book based on the story.

Ah, I see from the comment above: The Historian. That's the one!

Parrish Lantern-thanks as always for your comments

Sam (Tiny Library)-Dracula is a wonderful book-thanks so much for your comment.

Suko-Dracula is pretty much a must read.

WordsBeyondBorders-I read the historian about 2.5 years ago-(there is s post on it on the blog-)

Judith H-The Historian is an interesting book for sure

Not a teen anymore, (29!) but she loves all the shows and books.

I loved the pace of the book and the narrative style of Bram Stoker. The diary entries and the different point of view of each character made the story so real! I watched all the films too and found Cupola's version the most interesting.Here's my review of the book:http://beanbagtales.blogspot.com/2010/12/bram-stokers-dracula.html