Ring Lardner (1885 to 1933-Michigan, USA) and Damon Runyon (1880 to 1946-Kansas, USA) have a lot in common.   Neither were born in New York City but as soon as they were old enough they moved there.    Both died in New York City.   Both married and had several children.  Both were long time sports writers and both mostly wrote about baseball in their newspaper  columns.   Both wrote for the Broadway stage.  Both made use of a lot of New York City slang in their fiction.   Both treat women as  "girlies"  to be valued for their looks and attitude.   Both write about "tough guy" type of characters and both were comic writers.   Both wrote straightforward unpretentious entertainment that is still a lot of fun to read.

Ringgold Lardner's (he never liked his real first name) first novel was about a minor league baseball player and was an epistolary novel.   Virginia Woolf greatly praised  this work, You Know Me Al.   He was very successful in marketing his short stories and wrote the script for a Broadway Play with George S. Kaufman.   He was friends with many New City writers.   He is said to have used so much New York City slang in his short stories that when they were reprinted in England (where he enjoyed immense popularity) a glossary was often included.    "Some Like Them Cold" is the first epistolary short story I have read.   The story opens with a long letter from a young unmarried man, by profession a piano player who aspires to be a big time music writer, to a woman he met on a train from New York City to Chicago.   He says over and over that he does not want her to think he is the kind of "fresh guy" who talks to all the girls on the train.
She writes him back, they start out addressing each other as Mr and Miss, saying she is not the kind of girl who normally speaks to strange men on the train but she felt something good about the writer.   Their correspondence gradually becomes more intimate and they become close through the letters.   Lardner does a great job of individuating the characters.   When we see the man addressing his letters to "Dear Girlie" and hers to "Mr Man" maybe we know this is not from the 21th century!   Gradually the man begins to brag of his great success as a music writer and tells the woman he is meeting a lot of women but he does not want a "fast New York City" type of woman.  (The woman is from Chicago.)   As the letters go on the man gets phonier and phonier in his claims.   The final letter form the woman is just a flat out work of genius.   She gets mad and gets even but she never loses her dignity.       I do not see anyone disliking this story.   It is very good entertainment, well written and is in a kind of unique format for a short story.

Here is what Virginia Woolf said  about Lardner

"Virginia Woolf. In a review of "You Know Me Al" that must have startled Lardner, Woolf said that he "writes the best prose to come our (Britain's) way," often, she noted, "in a language which is not English." Further probing Lardner's Americanness, she observed that "It is no coincidence that the best of Mr. Lardner's stories are about games, for one may guess that Mr. Lardner's interest in games has solved one of the most difficult problems of the American writer; it has given him a clue, a center, a meeting place for the diverse activities of people whom a vast continent isolates, whom no tradition controls. Games give him what society gives his English brother." 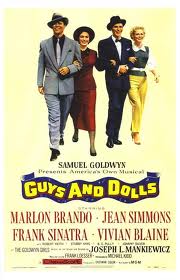 Damon Runyon is even more a New York City writer than Lardner.   He specialized in near gangster type characters (but decent gangsters who give to Salvation Army and all) and disreputable people in general.  He was very much into the world of Broadway.   As I began to read "Blood Pressure" I thought to myself I have heard these conversations some where before but I was not sure where.   Once the narrator of the story, who has been told by his doctor to watch his blood pressure, starts to talk about the floating crap game of Nathan Detroit I flashed to a movie I have seen numerous times, Guys and Dolls (1955- starring Marlon Brandon, Frank Sinatra, and Jean Simmons).   It turns out "Blood Pressure" was the basic source for the musical which became the movie, Guys and Dolls (still often show on TV).   "Blood Pressure" is a story about New York City tough guys.   In 1932 (at the start of the Great Depression in the USA) this meant shooting dice, selling then banned alcohol, and gambling on the horses.
"Blood Pressure" was also a lot of fun to read and I think most will enjoy it.

Both of these stories were in a  1947 collection of short stories my cousin Bonnie very kindly gave to me.   A lot of Lardner's work can be found online at Project Gutenberg but it appears the work of Runyon may not yet be in the public domain.

Please share your experience with Lardner or Runyon with us.

I very much appreciated this comparison, never heard of Ring Lardner until i started looking into whether there was a reason why the style of catcher in the rye was reminding me of damon runyon. Now i understand.