"The Tuxedos" by Jerome Weidman 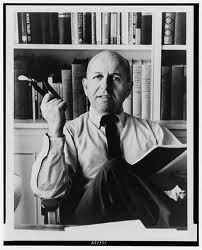 From the Streets of New York City

About a year ago my cousin Bonnie sent me a book that has been in the family for maybe sixty years, A Treasure of Short Stories (1947) edited by Bernadine Kielty.   It has turned out to be a great reading source for me.   It is also fun to see what short stories were considered among the world's best in 1947.   Kielty, at one time fiction editor for several prominent magazines and a selector for the Book of the Month club, has included her own short often fun mini-biographies of the authors.   Here is what she says about the subject matter of Jerome Weidman(1913 to 1998-USA):  "he seldom writes of anything but the streets of New York City, and more often than not, of the scum thereon".   Most of his short stories were published in The New Yorker as was this story.   He was jointly awarded a Pulitzer Price for drama and he wrote the book on which the super successful Broadway musical I Can Get It For You Wholesale" was based.

I think almost everybody will like this short story with the exception of people from New York City of Italian background.   In this story it is a family of Italians that does indeed come across as scum.   The story is told in the first person by a man who works for a formal wear rental place.   People come to them for clothes for fancy weddings and such.   The boss was a decent man but he had a bad habit of sending him out on deliveries that he could not complete prior to his paid too quitting time of six in the evening.  His job was to deliver the formal wear, get a receipt for it and of course it has to be on time for the big event.   To compress a bit, just before closing time his boss sends him out to deliver six formal suits, top hats, etc.   This is a bulky heavy load.  When he finally gets to the place he has been dispatched to he hears screaming coming out of the house.   He hears a number of men loudly "jabbering away in Italian" in what sounds like a bad fight.   He gets the courage up to knock on the door and tells then man who answers he is there to deliver the tuxedos.   The man says in a bitter way "Oh yeah, the Tuxedos" and he escorts him in.   He is finds six brothers, big men, are holding down a woman that looks for sure like their sister.   Her mother is screaming and her and her brothers are slapping her very hard in the face.   It seems just a few hours ago the groom called the sister and told her the wedding is canceled.   The brothers want to go to see the man to give him, if he is lucky, a horrible beating but the woman will not say where he can be found no matter how bad her brothers abuse and threaten her.   The man is very afraid the brothers will not sign the receipt acknowledging delivery of the formal wear.   I will leave the rest of the plot untold.

There is a lot in this story.   It is from an era not obsessed with political correctness where Italians could be stereotyped as violent abusers of the women in their families in a story in The New Yorker.

If you are a New Yorker subscriber you can read this story online.   Otherwise it is still under copyright and I did not find it online.   It is a fun story which will make you wonder what was in Weidman's mind about immigrant New York City Italians.   It is not a great work of art or anything like that just a slice of life in New York City in 1938 as seen by Jerome Weidman.

this sounds like one of those tales that make you cringe and yet you carry on reading to find out what happens.

Debbie Rogers-for sure political correctness has changed literature-thanks so much for your comment.