Sado-Masochism in the work of Junichiro Tanizaki

My Prior Posts on Junichiro Tanizaki 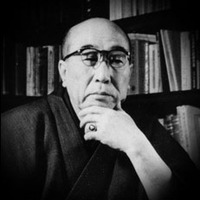 I really like Junichiro Tanizaki an awfully lot.   Prior to today I have posted on 12 of his novels and two longer short stories.    He is on all lists of best Japanese novelists and the venerable Harold Bloom includes his The Makioka Sisters  in his list of canon status works.   Juninchiro Tanizaki  (1886 to 1965-Tokyo, Japan-there is some background information on him in my prior posts) is also a lot of fun to read.    I think I have now read all of his translated novels and novellas and I am now happy to be starting on his short stories.

The three stories I will post on today are all reprinted in translations by Howard Hibbert in Seven Japanese Tales (1963).   The stories were written between 1910 and 1959.   Tanizaki had nothing to do with picking the stories for the collection.

All three of the stories I have read so far are very good, totally brilliant works, each powerful and disturbing.   I will start with one of the most famous of all Japanese short stories, "The Tattooer". 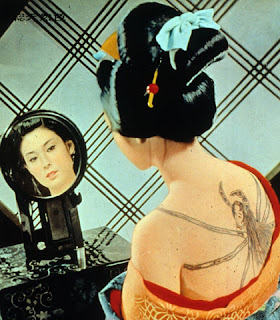 "The Tattooer"   (1910, five pages) is set around 1850.   The central character is a very famous Tattoo artist.   Tattoo artistry was highly valued.   Men sought out courtesans and geishas with beautiful tattoos.    Women of the pleasure quarters fell in love with men based on the beauty of their tattoos.   The famous tattoo artist tries to inflict as much pain as he possibly can on the men that he tattoos.   He loves it when a Samurai warrior breaks and sobs under the pain and clearly loves the pain he inflicts. To him a woman is a canvas.    What loves most is inflicting pain on beautiful young (14 and up) women while he produces masterworks on them.   He begins to tattoo a spider in a marvelous web on a woman of transcendent beauty.   As he progresses he realizes he is in complete thrall to the woman.   We know this is but an ephemeral relationship and we do not learn what happens next.   This is a very powerful tale and I think those heavily into tattoos will find it of especial interest.

"The Bridge of Dreams"  (1931, 25 pages)  is a very daring story.   It might be about incest or near incest between a man (who we first meet at age 8 or so and part company with in his mid-twenties) and his step-mother.   I do not want to tell to much of the plot of this really brilliant shocking story other than to say those who have a fetish for drinking breast milk will be in love by the time this story is over.    Flaubert and de Muappasant have nothing on Tanizaki!

In all of these stories there is a lot to be learned about Japanese culture.   His short stories can be compared on equal terms to any others I have read.   The sexual themes in the story are meant to make us uncomfortable and they do.    Women are treated as objects to be bought and sold and valued for their feel and looks.    People are fetish objects.

There are four more short stories in the collection and I hope to read them soon.

I have 7 Japanese Tales sat on my TBR shelf along with some prefer nettles & hope to read them both probably early next year as he's one of the writers I want to read all of.