"Never Bet the Devil Your Head" by Edgar Allan Poe 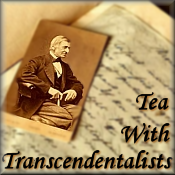 Poe takes a shot at the Transcendentalists

When I saw that  Jill of A Room of One's Own was hosting an event (Nov 15 to Dec 15) dedicated to exploring the work of Transcendentalists I was intrigued and knew I wanted to participate.   Transcendentalism refers to an intellectual movement began in the New England area of the United States in the 1830s.    Its most famous practitioners are Ralph Waldo Emerson and Henry David Thoreau.   It was a reactive set of doctrines in protest of the prevailing notions of the time.   It believed in the inherent goodness of man and in many cases was inspired by translations of  ancient India religious texts.  (Of course their understanding of the thoughts of the ancient texts is very much a clear case of Orientalizing.)  I have read and dearly loved the essays of Emerson but I would never try to "blog on" one of them.   They are just too densely written.  Reading Walden Pond was a powerful experience for me also.    Philosophically they have their underpinnings in German idealism as embodied in the work of Kant.  Walt Whitman was very influenced by the Transcendentalists.  I adore and have read Leaves of Grass numerous times but I do not see myself posting on it anytime soon and I think it is muddleheaded to treat him as a transcendentalist.

There is a kind of unworldly head in the clouds quality to some of the writings which offended and amused some of their contemporaries liked Edgar Allan Poe and Nathaniel Hawthorne.

"Never Bet the Devil Your Head" (eight pages, 1841) is an unusual Poe short story.   It is not a detective story or a paranormal or horror story.   The story is told in the first person by a narrator who sounds like he could be the author talking.   He says his critics have accused him of not writing stories with proper "morals".   He mocks literary critics who seek a profound hidden meaning behind works of fiction.   (There is a Brahmic quality to many of the Transcendentalists as if they were in possession of elite knowledge that probably came across as vain to many.)  I have to quote a bit from the wonderful prose of Poe:

"These fellows demonstrate a hidden meaning in “The Antediluvians,” a parable in Powhatan,” new views in “Cock Robin,” and transcendentalism in “Hop O' My Thumb.” In short, it has been shown that no man can sit down to write without a very profound design. Thus to authors in general much trouble is spared. A novelist, for example, need have no care of his moral. It is there—that is to say, it is somewhere—and the moral and the critics can take care of themselves. When the proper time arrives, all that the gentleman intended, and all that he did not intend, will be brought to light, in the“Dial,” or the “Down-Easter,” together with all that he ought to have intended, and the rest that he clearly meant to intend:—so that it will all come very straight in the end."

The narrator begins to tell a story about his friend, Toby Dammit.   Toby likes to make hypothetical bets of the form of "I'll bet the Devil by Head" that it will rain today.   The narrator tries hard to break Toby of this habit but he cannot.   (The devil was very real in this time and place and not to be treated lightly).    They are out for a walk one day and they come to a covered bridge with a turnstile.   Toby says "I bet the devil by head I can jump over that turnstile."    Before the narrator can discourage him a mysterious old man comes out of the shadows and more or less goads Toby into the jump.  (spoiler alert).   Toby seems to easily jump over the turnstile but he is knocked backwards when he hits his head on something.     The narrator sees the old man running off with something in his hands.   It is Toby's head.   He had set up a sharp blade just at the point where Toby's neck would be as he jumped over the turnstile!   The narrator pays for his funeral and sends the bill to the Transcendentalists who he believes caused Toby to think he could transcend all obstacles with the power of his mind and taught him that there was no real evil in the world.   When the   Transcendentalists will not pay it, he has Toby dug up and sold for dog food.   (OK this is still Poe!)

The narrator feels that Dammit may have been infected by the disease (Poe's word here) of Transcendentalism and because of this has lost his grip on reality.

" Not so upon those of the unhappy Dammit, who offered to bet the Devil his head that I was hipped. He seemed to be in an unusual good humor. He was excessively lively—so much so that I entertained I know not what of uneasy suspicion. It is not impossible that he was affected with the transcendentals. I am not well enough versed, however, in the diagnosis of this disease to speak with decision upon the point; and unhappily there were none of my friends of the “Dial” present."

("The Dial" was a journal in which a number of the leading Transcendentalism published their works. )

You can read the story HERE .   "Never Bet the Devil Your Head" is a different not often anthologized Poe story.   For sure it is worth reading and it is a good example of "anti-transcendental" literature.

I really commend Jill for hosting this event and hope a lot of people will join in.   She has lots of good reading suggestions and background information on her great blog, A Room of One's Own.