"The Brewery of Egg-Shells" by T. Crofton Croker 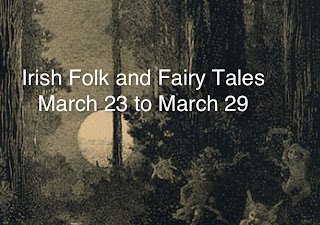 "To and fro we leap,
And chase the frothy bubbles,
While the world is full of troubles
And is anxious in its sleep.
Come away! O, human child!
To the woods and waters wild,
With a fairy hand in hand,
For the world's more full of weeping than
you can understand."-William Butler Yeats 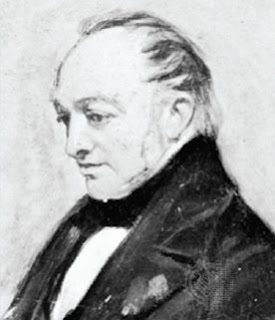 William Butler Yeats held T. Crofton Croker (1798 to 1854, County Cork, Ireland) in very high esteem.   He included six of his works in his collection, Folk and Fairy Tales of the Irish Peasants.   Croker was a collector and scholar of Irish antiquities and folk stories.   He took these stories, mostly from the south of Ireland, and fashioned them into easy to read, enjoyable short stories.   As you read Irish literature you will see a good bit of material devoted to human children being stolen by fairies.  In many cases the fairies would substitute a fairy, often a sick one, for a human baby so the mother would care for it as it the fairy were her own child.   Many fairies were adapt changelings so it was not always easy to be sure a swap had been made.   One of my favorite stories from Irish Short Story Week Two was "The Child Stolen by Fairies" by Joseph Sheridan le Fanu.   In this story a spectral coach travels through Ireland picking up children.

My first reaction to these stories and poems was to see it as some how related to the massive rate of child and infant morality in the period and in the case of Ireland greatly exacerbated by the periodic famines.   It was somehow easier to blame the illness or death of a child on malignant fairies than to ponder the real causes.   Also a child stolen by fairies could always be imagined as alive, happy and possible to return one day.

As the story begins, Mrs Sullivan is wondering what could be wrong with her very young child

Mrs. Sullivan fancied that her youngest child had been exchanged by "fairies theft", and certainly appearances warranted such a conclusion; for in one night her healthy, blue-eyed boy had become shrivelled up into almost nothing, and never ceased squalling and crying. This naturally made poor Mrs. Sullivan very unhappy; and all the neighbours, by way of comforting her, said that her own child was, beyond any kind of doubt, with the good people, and that one of themselves was put in his place.
Mrs. Sullivan of course could not disbelieve what every one told her, but she did not wish to hurt the thing; for although its face was so withered, and its body wasted away to a mere skeleton, it had still a strong resemblance to her own boy. She, therefore, could not find it in her heart to roast it alive on the griddle, or to bum its nose off with the red-hot tongs, or to throw it out in the snow on the road-side, notwithstanding these, and several like proceedings, were strongly recommended to her for the recovery of her child.


She meets an old woman wise in the ways of fairies who gives her some advise on how to be sure if your child has been stolen by fairies and she tells her how to get your child back.  It involves brewing a dozen egg shells in boiling water.   At the same time she is told to heat a iron poker red hot and be ready to ram it into the fairy child.

Here is how the story ends (excuse the spoiler but this is a folk tale and one needs to know the ending to understand the role of these tales in Irish culture.


"And what are you brewing, mammy?" said the little imp, whose supernatural gift of speech now proved beyond question that he was a fairy substitute.
"I wish the poker was red," thought Mrs. Sullivan; but it was a large one, and took a long time heating; so she determined to keep him in talk until the poker was in a proper state to thrust down his throat, and therefore repeated the question.
"Is it what I'm brewing, a vick," said she, "you want to know?"
"Yes, mammy: what are you brewing?" returned the fairy.
"Egg-shells, a vick," said Mrs. Sullivan.
"Oh!" shrieked the imp, starting up in the cradle, and clapping his hands together, "I'm fifteen hundred years in the world, and I never saw a brewery of egg-shells before!" The poker was by this time quite red, and Mrs. Sullivan, seizing it, ran furiously towards the cradle; but somehow or other her foot slipped, and she fell flat on the floor, and the poker flew out of her hand to the other end of the house. However, she got up without much loss of time and went to the cradle, intending to pitch the wicked thing that was in it into the pot of boiling water, when there she saw her own child in a sweet sleep, one of his soft round arms rested upon the pillow--his features were as placid as if their repose had never been disturbed, save the rosy mouth, which moved with a gentle and regular breathing.

Thanks for posting. I enjoyed the fairy tale.