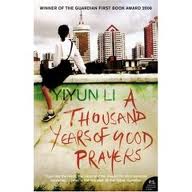 Yiyun Li (1972) won the 2005 Frank O'Connor Prize for the best collection of short stories by one author for her first book,  A Thousand Years of Prayers.   Her first novel, The Vagrants, won the International IMPAC Dublin Literary Award.   In doing some research for Irish Short Stories Week Year II I discovered her "Irish Connection" and decided to read a couple of her short stories.    She has said that one of the greatest influences on her work is the great Irish short story writer (he will be featured during Irish Short Story Week Year Two), William Trevor. Li was born and grew up in Beijing, China and graduated from Beijing University.   She left there to go to the University of Iowa to study immunology.  She got interested in writing while there and earned a master MFA from the Non-Fiction writing program as well as an MA in immunology.   She currently teaches at the University of California Davis.


The Two Stories I read, both from her prize winning 2005 collection of short stories, A Thousand Years of Prayers, were about people dealing with the new realities of life in China or life in America for immigrants.
I liked both of these stories a lot an hope to read her full collection one day.

I am not sure which of these two stories I liked the most, both are flawless beautifully written stories that Frank O'Connor himself would like, I hope anyway! 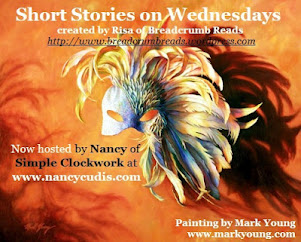 "Extra" is the story of Granny Lin, in her fifties, never married and with no children who has just lost her job.  She is talking to one her friends and she tells her she should find and old sick man and marry him.   Lin, with no experience with men, is shocked.   She says how will I find a husband at my age.  Her friend tells her no problem lots of widowers are looking for care givers and have found it better to marry than hire one.    Her friend helps her locate a match and after some being interviewed by the man's grown children she marries a man who does not really know his first wife has passed away.    Granny Lein, as she is calls because once she marries the man she is grandmother to his grandchildren, does a very good job taking care of the man and coping with his disabilities.    Not to give away the full great plot, this situation ends and some how Granny Lin lucks into a job working in a private school for the children of  the newly rich.   Granny Lin really likes it there, in part because to her the food is so good and abundant.    One day new boy, about six, joins the school.   Unlike all of  the other kids, he lives there full time.   His father has moved a concubine into his house and now he does not want the son of his wife around the house.  Granny Lin identifies with the boy as someone no one really wants.   I will leave the rest of the story untold but it is just a beautiful story.

The title story "A Thousand Years of Prayers" is set in San Francisco, California.  There are only three characters on stage in the story, a father in his sixties or so who has come to China to visit her to help her get over her divorce, his thirty something very Americanized daughter, and a Persian speaking lady in her sixties who is a neighbor of the daughter.   This story is about communication in families and what to much silence can do.   It is about the corrosive effects of long term lies.   The father has been lying to his daughter about something very central to his identity as a man and father and the daughter has been lying about why her marriage broke up.  In addition to being about silence, it is about how a conversation once started can take on a life its own.   It was really interesting to see the bond being formed between the father and the Persian speaking neighbor who can communicate only in the little English they share.

Both of these are very good stories.   I also want to read her novel, Vagrants, which everyone loves.   Her latest collection of short stories is Gold Boy, Emerald Girl.

These sound like great tales & I love how you found the Irish connection to tie in beautifully with your week.

Parrish Lantern. Thanks. All short story writers are under the influence of James Joyce. Even those who have never read him.

Yiyun is a wonderful writer and a very sweet person too. I met her at the Cork Short Story Festival, on two seperate years. Gold Boy, Emerald Girl is well worth reading.

WOMEN RULE WRITER-thanks for sharing your personal insight in Yiyun


Hello friend
How are you Today Visit your Web Blog Page Got more Information you share Best Information my pray with you and Your Business get more success and Blessings in The name of LORD.
bonds
prize bond
prize bonds
open market rates
prize bonds results