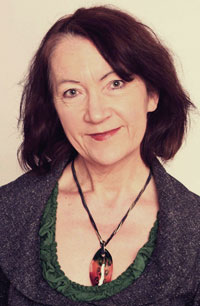 Éilís Ní Dhuibhne (1954, Dublin) is the author of eight novels, four in English and four in Irish. Writing in Irish is a patriotic gesture as it greatly limits your audience, just like writing a novel in Tagalog, not English, does in the Philippines.   She has a PdD from The National University of Ireland, focusing on the work of Chaucer as part of an oral tradition.    She has taught at the University College Dublin and was for many years a curator at The National library in Dublin.   She also teaches creative writing.   Her novel, The Dancers Dancing, was short listed for the 2000 Orange Prize.   It is due to a very good suggestion from Nuala Ni Chonchuir that I owe my discovery of Éilís Ní Dhuibhne.     She is very dedicated to preserving and promoting the Irish literary tradition.    She has clearly thought very deeply about what it means to be a short story writer in 21th century Ireland.

"Trespass", which I read in the anthology, Best European Fiction of 2011, does not just have a "surprise ending".      Saki and  O. Henry working together in the company of Edgar Alan Poe could not have come with as sublimely destructive ending as we find in "Trespass", a truly masterful short story.

There is a very interesting interview with Dhuibhne at the Dalkey Archive Press in which she gives advise to short story writers and gives a characterization of her own writing style that perfectly fits "Trespass".   I can do no better than quote from it a bit:

"If I were forced at gunpoint to categorize my writing, I would like to describe it, roughly, as postmodern, feminist, and Irish. It combines realism with surrealism; it can be either highly imagined and or very naturalistic. It has frequently, though not always, striven to foreground the female perspective."


The entire interview is very interesting, informative and can be read here.   Dhuibhne also gives a number of reading suggestions and some spot on advise to budding short story writers.

"Trespass" opens with a single woman living in Dublin who works as a beautician, has a degree philosophy and a  grown son working as a head bellman in a hotel in San Francisco.   She is getting ready for and is very excited over her planned for tommorow trip to California.   Dhuibhne does a wonderful job of letting us see how excited the woman is over her trip.   It felt perfectly real to me.   She has to make some plans to be away for three weeks, including having someone feed her dog.    Everything is totally ordinary up until then.   Now we enter into a kind of another realm in the story.  What is so horrible about what happens is at all seems a completely possible extension of the mundane day to day life of the woman and life in the modern world.  I think it reflects the random violence and madness just below the surface of much of life today in a way that transcends mere brilliance.   I liked the main character a lot.  I like how she dealt with the seeming irony of having an honors degree in philosophy with being a beautician.   I was so shocked and engrossed in the story that I had to restrain myself from yelling out "No, please don't go through that door" as events began to unfold.

This story is not online so I know that most people will not have the opportunity to read it, which is sad.

"Trespass" is a great short story.   I certainly hope to read more of her work and would order a collection of her short stories now, if there were a Kindle edition.