The Sense of an Ending by Julius Barnes 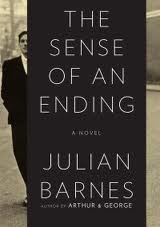 Not to long ago I posted on a short story by Julian Barnes (UK, 1946) "One of a Kind"  which I greatly enjoyed.  In a comment Dolce Bellezzaa suggested I read his  2011 Man Booker Prize winning novel, The Sense of an Ending.   Thanks to the generosity of The Sayajirao Gaelwad Institutute of Boussweau Studies, a sponsor of  The Reading Life, I was provided with Kindle editions of this work and four other books by Barnes, three of which were short listed for the Man Booker Prize.   I will next read and post on, probably in mid April, his The History of the World in 10 and 1/2 Chapters, then next Flaubert's Parrot.

The Sense of an Ending is one of the best "looking back on my life" now that  am old books I have read in a long time.  It is kind of a reverse bildungsroman work in which a man looks back on his life and figures out what his life really means only when it is really to late to matter.  The novel is told in the first person by a man who was somewhat successful, had a somewhat OK marriage for a while which ended in a peaceful divorce and has a grown daughter on whom he is on amiable terms without real intimacy.

The novel can be divided into two section, in one section the main character, Tony Webster, tells us about his college and adolescent activities with his male friends and tells us about his first serious girl friend and his break up with her.    In the second and much longer section we flash to a sixty year old Webster who is beginning to look back on his life and see if he can assign any meaning to the various things he has done, he sort of drifted through life as most really do, and the relationships he has had.

This book is about the fluidity of memory and how our view of the past changes as we age.   Maybe older people will relate to this novel better than the young.

The level of writing is very high.   Barnes has done a great job of making an intelligent, cultured man come to life for us.  I endorse this book to anyone who likes a thoughtful book and can get by without a lot of "action".


Please share your experience with Julian Barnes with us.

I reviewed this book last August and it still amazes me that I get comments for it everyday usually from Anonymous people who don't even have a google id or blog. It's the only book I've reviewed that has generated so much discussion. I'm curious about your own theories about what really happened there. Here's the link to my review: http://theliterarystew.blogspot.com/2011/08/sense-of-ending-by-julian-barnes.html

I've had lots of face-to-face discussions with friends about this clever book. What engages almost everyone is that the ending is left to personal interpretation - and did anything at all happen between Tony and the mother, or was it only wishful thinking in the light of later information? Of course the clue to the ending is in the title, with the word "Sense" holding so many subtleties, including the idea of rationality. This kind of writing is why I always come back to Julian Barnes - he's marvellous.

I think I will like it. As I am not that young either! I can definitely look back and reminiscence and relate to this book!

This looks terrific! I loved Flaubert's Parrot which I read a few years ago and presented a brief seminar on for my senior year at university. It was the most unique book I'd read up to that time and still counts to date.

I think that Julian Barnes could describe a root canal and make me want to read about it. His superior command of the English language is unrivaled by few contemporary authors. I thoroughly enjoyed this book. I don't think that I've read a book that provides insight into the male mind since I read Catcher in the Rye. I felt grief when it ended. I'll definitely be looking for Julian Barnes other books.

Memories are still more complicated and tricky. We unconsciously and conveniently alter them and present it for others (sometimes for ourselves) the way we want... rather the way IT EXACTLY WAS!!

Initially author tries to give different definitions of history through different characters of the story about some great political events of the past and then the way he uses those definitions to the history a common man creates out of his own life may not be of much importance to others. But YES, each and every man creates history in his own way!!

“The sense of an ending” is one book which tells a simple story but the complications of relationships, emotions and altering memories to write our own history the way we wanted it to be.

In authors own words “What you end up remembering isn't always the same as what you have witnessed.”

The discussions which are there in the book makes us think about many aspects of life. And sometimes forced me to think and accept ignorance is bliss. The more we know or think about life, the complicated it becomes.

All in all, this entire book is a master piece and worth every bit of appreciation and awards it has received!!