Nude by Nuala Ní Chonchúir-Two Stories from the Collection (2009, 133 pages)

Please consider joining us for Irish Short Story Week Year Two, March 12 to March 31.  All you need do is post on one short story by an Irish author and send me a comment or an email and I will include it in the master post at the end of the challenge.

"So Hinda, have thy face and mind,
Like holy mysteries, lain enshrined.
And, O, what transport for a lover
To lift the veil that shades them o'er!-
Like those who, all at once, discover
In the lone deep some fairy shore,
Where mortal never trod before,
And sleep and wake in scented airs
No lip had ever breathed but theirs"-Thomas Moore 1817


Nude is Nuala Ní Chonchúir (1970-Ireland) third published collection of short stories.   She has also written a highly regarded novel, You.   (Her excellent website has additional biographical data, interviews, as well as a very fascinating and illuminating essay in which she gives advice to the budding short story writer and lists her favorite authors in the genre.)


One thing I have learned about Irish writers is that they assume a very well read and cultured audience.   I think this is in part because the standard of writing and knowledge has been set so high by giants like James Joyce, W. B. Yeats and Samuel Beckett  and Chonchuir is in this tradition. 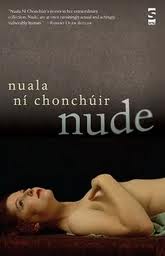 I found the stories in Nude to be beautifully written lessons in the nature of the gaze, the meaning of nudity and the lingering power  of  colonialism partially reinstated in an account of the relationships of men to women and artists to the women who pose nude for them.   It is about the difference between being naked and have it mean nothing and being nude and having it mean everything.    I think it is also, in the tradition of Edward Said, about the orientalizing of Irish women by the English and in a greater sense of women by men.   There are twenty stories in Nude and all of them are very much worth reading.


Today I want to take a  look at two of the stories, both about women who posed for famous portraits of an unclothed woman.    I concede that my education in the visual arts lags way behind my literary education (such as it may be!) so I did some research after I read the two stories I will focus on, "Madonna Irlanda" and "Mademoiselle O'Murphy".   After doing my research I read them again and understood, I hope, them more.


"Madonna Irlanda" is the lead story in Nudes.   The title refers to a very famous 1977 painting by the artist Michael Farrell.   In a very good article "The Irishness of Irish Painting" by James Christen Stewart he tells us:


"One of the strongest and most provocative paintings to address Ireland's bitter history came in 1977 with Michael Farrell's Madonna Irlanda, subtitled The Very First Real Irish Political Picture. Uniting disparate elements drawn from the history of art -- with overt references to both Leonardo da Vinci and François Boucher -- the painting is a metaphor of Ireland corrupted into a state of quasi-prostitution by its continuing partition and a sense of national and cultural subservience."


(You can do a Google Image search to see the painting.)    The Madonna in this painting does appear as if she is positioned to provide sexual service to an overlord.   The suggestion then is that the woman is Ireland, debased by her colonial experience.


As our story opens the woman narrating it has recently ended  a twelve year marriage to a very critical husband.    She is an artist and sets out alone from Ireland on a trip to Paris in the hope the great artistic traditions of Paris will revitalize her creativity.   Her ex-husband suggested she drop by while in Paris to see an old art school friend of his, Mike Farrell.    When she meets Farrell he asks her if she will pose for him for a painting he will start soon.   I want to quote a bit from the story so readers can get an idea of the prose style of Ní Chonchúi.


"We went to the Louvre to see L’Odalisque, one of the Boucher
portraits Micheal wanted to base his painting on. We
stopped at the inevitable bistro on rue de Rivoli and
Micheal had his two morning beers. Charged up, he
marchedme through the dimart gallery, bouncing upmarble
stairs and along corridors ahead of me, towards the
Sully Wing.
‘Ta-dah!’ he said, when we reached the painting, as if he
were responsible for it. The portrait showed the artist’s
wife, lying on her stomach on a lake of blue velvet, her
behind exposed.
‘Meaty, isn’t she?’ I said".


As the story progresses we sense the sexual feelings being aroused in the woman, no man but her husband has ever seen her naked.   Farrell tries to convince her that naked flash is just an ordinary part of his business but we do not really fall for that and neither does the woman.


I do not want to tell much more of the plot of "Madonna Irlanda".   I read the story five tines, a really lot for me!   As I read the story I noticed her ex-husband was named "Victor" and I wondered if this is designed to make us think of the most Parisian centered of all writers, Victor Hugo.    There is a lot more in this almost lyrical story, such as the marvelous conversations, but I will leave the rest for another time.


"Mademoiselle O'Murphy"  is about a real person, Marie-Louise O'Murphy (1737 to 1814) who was the daughter an Irish Officer.   She became at age 14 one of the mistresses of Louis XV and was a rival to Madame Pompadour.    At the request of the king, the famous painter Francois Boucher painted her reclining on her stomach while nude on a couch.   The suggestion in the painting is that she is prepared to service the king.   Some have seen this as suggesting that an Irish woman can achieve fame or success only as a quasi-prostitute.


"Mademoiselle O'Murphy" and "Modanna Irlanda" are very linked stories as Boucher's painting is a model for Farrell's.  (There is a good article on O'Murphy here which also has an image of the painting.)


The story opens powerfully with this thought from O' Murphy now that the king has just died.


"You died today. I’ve sat at my window all morning, staring
at the untrustworthy spring sunshine hovering over the
boulevard, wondering who you thought of in the end. Old
Pompadour? Your Polish wife, perhaps? Or me? And I’ve
wondered, too, whether men hold memories like women
do, as full-flowering scenes with smells, skin-touches,
falling light. But, no. A man’s memories are more likely to
hang like meat in aspic, still and jellied, trapped in time".


I loved how this story got into the mind of O'Murphy.   The account of her relationship with her rival Madame Pompadour is just brilliant.   Ní Chonchúi shows us how even though they almost hate each other on another level they are both bonded as women who are one step above prostitutes.


All of the stories in Nudes are brilliant.


I fully endorse Nudes to anyone who loves short stories.  There is a powerful sensibility that has seen way below the surface of things behind these stories.


You can here Nuala read from her story, "Peaches"

I have also reviewed her stunning poetry collection The Juno Charm.      That post includes an interview of the author.

I've just finished reading Nuala's To the World of Men, Welcome and just loved it. What stuck with me was the atmosphere in these stories, a hanging, underlying sense of the unsaid. Asylum in particular stayed with me - I even dreamt about it! Thanks for the review of Nude. Next on my list!

Nude's an accomplished book from a super talented writer.
Thanks for posting this, Mel.