Irish Short Story Week Year Two-Meet the Staff, Resources and a Place to stay for the event 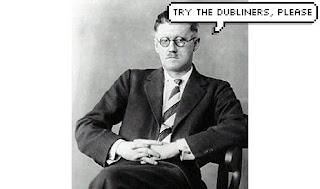 Many contemporary writers have one or two of their stories on their webpage.   Some of the best known of current writers like Kevin Barry and Claire Keegan can be found in the public archives of The New Yorker.


Go here to listen to Tessa Hadly read "The Jungle" by Elizabeth Bowen.  -one of her better stories

The Staff from Irish Short Week Year One are back, some new editions will stop by. .   We also are changing the venue of the party from Elizabeth Bowen's family estate to Dunsany Castle near Tara, which is thought to be the oldest inhabited dwelling in Ireland.   It is the home of Lord Dunsany, to be featured twice, I think, during the event.   With 200 plus rooms it can hold a lot of people.  Occupied since 1180, it has plenty of ghosts and is home to numerous fairies.  Leprechauns are on call for those needing work done on their shoes.

Two members of The Reading Life Staff consider themselves in charge of Irish Short Story Week.   Rory, born in a wonderful story by the very American writer Stephen Vincent Benet, "The Luck of the Irish" will be returning.   He was around when Dunsany Castle was being built.  He and Camilla, the first literary lesbian vampire born in a work by Joseph Sheridan Le Fanu, will be cohosts.   They have a very strong rivalry, almost a sibling thing.    Carmilla likes to warn female guests to not fall for Rory's offer of a pot of gold and Rory insists Carmilla is really just in love with him and consumed by jealousy.

We hope to have some guests stop by also.   Eudora Welty might stop by to visit on Elizabeth Bowen day to relive the time Eudora spent at Bowen's country house and who knows who might stop by on Oscar Wilde day.   Samuel Beckett says he is waiting on someone to decide if he will join in or not.

There are really no big rules for joining in.   All you need to do is post on an Irish short story, as essay about Irish short stories or even a book about them like Frank O'Connor's The Lonely Voice:   A Study of the Short Story, at times a quirky work but a must read.    Post as much or as little as you want.

This year I am including Irish-Australian authors like Barbara Baynton and Henry Handel (a woman).   I looked at the first ten comments on my blog back in July 2009 and 4 of those comments were by Australians and, assuming William Trevor is  right (and I certainly would not argue) the same conditions that made the short story the dominant literary form in Ireland, also were prevalent in part in Australia in the late 19th century when the genre of the Outback or Bush tale began.   Most of the writers were of Irish descent.
I am including more pictures this year and trying to make the stories come to life with quotes from everything from an early Bob Dylan album, The Crying of Lot 49, and ancient Indian poetry.

The greatest novelist, playwright, and poet of the 20th century all were from Ireland  as was Bram Stoker the creator of Dracula and Oscar Wilde, a true cultural icon world wide.  Oh yes Oscar's mother will be stopping by?  I wonder if Colum Tobin wrote an essay on Oscar and his mother?

There will be several stories written in the last couple of years by writers I think might well be featured on an Irish Short Story Week done in 2040 or so that will be featured.

We will spent some time in old castles, meet some ghosts and fairies, travel across the Atlantic and come home and spend a little too much time in graveyards.   We will do some serious drinking, fall in and out of love and hopefully learn something along the way.  I hope we will have some fun.

When you your post just comment anywhere on my blog, please and I will include your post in the final summation, just as I did last year.

If you have any questions or comments please let me know.  My idea is to make it as easy as possible to join in.    There is no sign up sheet just post on your blog and let me know.   If you do not have a blog, I will be happy to host your post here.

I have a schedule which I will probably post again but you do not need to follow that.