"The Faithless Wife" by Sean O'Faolain


Sean O'Faolain (1900 to 1991-Cork City, Ireland) was the son of a policeman.   As did Frank O'Connor and Liam O'Flaherty, he fought in The Irish War for Independence, 1919 to 1921.   He received M. A. degrees from The National University of Ireland and Harvard.   From 1940 to 1990 he was the director of a very prestigious literary journal, The Bell.    His daughter Julian O'Faolain is a Booker Prize nominated author.  O'Faolain was a very productive writer publishing 13 books and 90 short stories.   The Collected Short Stories of Sean O'Faolain is over 1300 pages long. 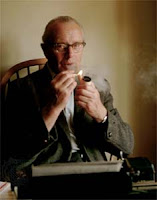 Last year during the first Irish Short Story Week, I posted on two of his better known stories, "The Trout", a wonderful story about a city family on a country holiday, and "Sinners", a story about a priest using the power of the confessional to psychologically abuse an adolescent girl.

"The Faithless Wife" is a very different story.   Unlike the other stories it is replete with many references to classical music and to Irish literature.    The narrator of the story is a deeply cultured, or so he sees himself, member of the French ambassadorial staff in Dublin.   He is having an affair with an Irish woman married to a man thirty years older than herself who can talk of nothing but his scissors factory.   One day things get complicated when the husband has a very bad stroke.  At the first the rather selfish man hopes the husband will die so he and the woman can be free to do as they like, and she will inherit all of the man's money.   Things get complicated when the faithless wife now feels great devotion to her husband.    It all comes crashing down when the doctors tell the wife her husband will probably live on for years, only in a mentally reduced state.   The father of  the woman is a judge on the supreme court.

The pleasure of this story, and I really like it a lot, is in the very subtle characterizations of the wife and the other man.   Slowly we see the almost low esteem which he has for Irish culture come out, compared to that of France.   In a truly devastating wicked few lines the man dismisses the Irish novel's portrayal of the people of Ireland as

"half savage Brueghelesque peasants, or urban petite functionnaires drunk on religion, patriotism, or undiluted whiskey or taking flight to England..pastoral humbuggery or at its best pastoral lyricism.  As for Molly Bloom!  He enjoyed the smell of every kissable pore of her voluptuous body without for one moment believing she ever existed.   James Joyce in drag."

The prose of this story is simply exquisite.  I think this is meant to match the self-image of the central male character in the story and it works perfectly.

As I read this story, I did wonder it is was somehow supposed to remind some readers of Elizabeth Bowen's long term affair with a Canadian diplomat.

I read this story in William Trevor's collection, The Oxford Book of Irish Short Stories.  As far as I know it is not available online.   I will for sure reread this story.   I hope that should there be an Irish Short Story Week Year Three in 2013 (if there is not something has happened to me) that I will post on more of O'Faolain's stories.

Please share your experience with Sean O'Faolain with us.

this collection is on my wishlist.

Parrish, it is a great short story collection, one of the very best

Parrish, it is a great short story collection, one of the very best