"The Model Millionaire" by Oscar Wilde-Post 4

47. Wilde himself is a transitional figure. The man who, when he first came to London, sported a velvet beret, lace shirts, velveteen knee-breeches and black silk stockings, could never depart too far in his life from the pleasures of the old-style dandy; this conservatism is reflected in The Picture of Dorian Gray. But many of his attitudes suggest something more modern. It was Wilde who formulated an important element of the Camp sensibility -- the equivalence of all objects -- when he announced his intention of "living up" to his blue-and-white china, or declared that a doorknob could be as admirable as a painting. When he proclaimed the importance of the necktie, the boutonniere, the chair, Wilde was anticipating the democratic esprit of Camp.-from Susan Sontag's "Notes on Camp"

u
Resources and  Ideas for Irish Short Story Week


Please join us for Irish Short Stories Week-March 12 to the 22.  All you need do is to  post on your blog about an Irish Short Story and leave me a comment so I can include it in the master post. 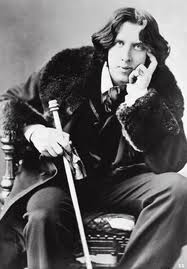 In 1881, William Forster, chief secretary of Ireland, suspended the right of habeas corpus.    Czar Alexander of Russia is assassinated as is the American President, James Garfield.     University College Dublin is founded.   The first Sherlock Holmes story is published.     The best  novel published that year was Portrait of a Lady.   One Hundred and twelve years after this story was published, homosexuality was decriminalized in Ireland.    The population of Ireland was 5,174,836, more than 2.5 Million less than 1841.


Oscar Wilde (1854 to 1900 Dublin, Ireland) most famously the author of The Picture of Dorian Gray" is an iconic GLBT writer.   Everyone who reads The Picture of Dorian Gray while young (and you should read it while young so you can reread it several times!) wishes they lived in a world where people talked the way they do in his book.   Most readers of Wilde stop at his novel.  A few of those who really like the novel go on to his great plays and wonderful short stories.


I have read a number of his short stories and fairy tales and "The Model Millionaire" is one of my favorites.


The Model Millionaire" reminded me of Picture of Dorian Gray in its tone and setting.   ( It is not as wicked a work but then what would be?)    The central character in this story is  Hughie, a young man who lives from the 200 pounds a year his aunt left him:   "He had tried everything. He had gone on the Stock Exchange for six months; but what was a butterfly to do among bulls and bears?"   Hughie has a young lady he wants to marry but her father will not allow it until Hughie can show him he has at least 10,000 pounds.    Who but Wilde could describe a character like that and make us love him.   One day Hughie goes to visit the studio of an older friend of his who is a very successful and prosperous because of it society portrait painter.

The painter is doing a portrait of what seems a tramp dressed in ragged unwashed for a long time clothes.  Hughie asks the painter how much an artist model gets paid and is shocked by the small amount.     He then asks the artist how much he will sell the painting for and  learns it will be sold for an amount  ten times greater than Hughie's annual income.     When the artist steps out for a moment Hughie gives the portrait sitter all of the coins he has in his pocket.   This means Hughie will not be able to go anywhere by cab for a month so it is a real gesture.    When the seeming tramp leaves the painter tells Hughie that the model is very taken by him.   The painter reveals that he has told the man all about Hughie including where he lives and that he needs 10,000 pounds to marry.   Hughie is concerned the tramp may show up at his door.    The painter reveals to Hughie the identity of the model.


'What I say,' said Trevor. 'The old man you saw to-day in the studio was Baron Hausberg. He is a great friend of mine, buys all my pictures and that sort of thing, and gave me a commission a month ago to paint him as a beggar. Que voulez-vous? La fantaisie d'un millionnaire! And I must say he made a magnificent figure in his rags, or perhaps I should say in my rags; they are an old suit I got in Spain.'

'Baron Hausberg!' cried Hughie. 'Good heavens! I gave him a sovereign!' and he sank into an armchair the picture of dismay.


"The Model Millionaire" is a surprise ending short story (not a real shocking surprise) so I will not tell any more of the plot than I have.   The fun in this story is in the tone and the turns of phrase.  It is easy to read and follow.   It is a traditional story.      You can read it in just a few minutes online here .


Please share your experience with Wilde with us.
Mel u

This sounds quite intriguing! Thanks for the link.

I must read more of Oscar Wilde. What a great intro you have given. Thank you. (Yes, I love the new header)

A great fan of Oscar Wilde & love Dorian Gray, out of curiosity why the Mishima picture.
PS have linked my post to to Irish Short story week here.

Suko thanks for your comments as always

Nancy-great post on your blog on Wilde. I added a link to it on my resources page