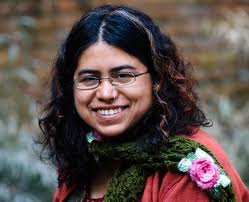 Sushma Joshi (Kathmandu, Nepal, 1975) was long listed in 2009 for her collection of short stories, The End of the World for the Frank O'Connor International Award for Short Stories.    She is also a well regarded documentary film maker.    She was educated in her high school years at a school run by British missionaries.   It was here she developed a passion for literature and decided she wanted to become an author so she could speak for the people of Nepal.   She received grants that allowed her to obtain degrees from Brown University and The New School of Social Research in New York City.   She also was awarded a writing fellowship by the  MacArthur Foundation.    She is also an Asian fellow.   She is the leading author from Nepal writing in English with an international readership.


I have previously posted on two of her short stores,"The End of the World" and "I Woke Up Last Night and I Cried", both of which I enjoyed greatly.   Both stories deal with matters relating to immigration and the poverty in contemporary Nepal and its impact on the population.   Her stories also deal with the cosmic irony of young western intellectuals, often disaffected, who come to Nepal for what they see as the deep eastern wisdom while the people of Nepal are in quest of western consumer good and the best young people in the country strive to get out.


"The Discovery of the High Lama" is a very wise, funny story that can, like the best of short stories, tell us as much about ourselves as it does the people in the story.  The story is narrated by a young man, twenty something, who succeeded in getting a grant to study in the United States.   He comes back to Kathmandu for a visit and he begins to wonder what happened to his old friends.   One of the members of his circle was always considered quite slow mentally but his father, on the National Sports Authority of Nepal, placed him in a karate program at age five and he is now so good he is invited to go to Mongolia to compete on the team from Nepal against the Mongolian team.   I won't spoil the fun for you by telling how it happens but he ends up being taken for the reincarnation of a High Lama and in time becomes a much sought after speaker on "eastern" wisdom on the  international circuit.


The ending of the story is really well done and I will let you discover it for yourself.


The story can be read here.

A Kindle edition of her collection of short stories set in Nepal, The End of the World,  is available for $4.95.

Her first novel, Loving the Enemy, a love story set in the civil war in Nepal, will be published in 2012