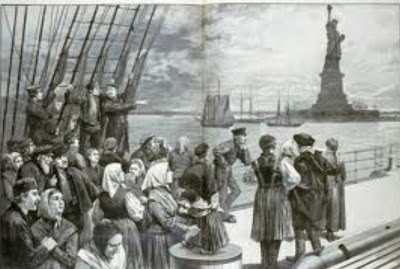 "Take George Moore, for example. George Moore is the best living novelist — and the worst; writes the most beautiful prose of his time — and the feeblest"-Virginia Woolf
"I pity the poor immigrant
Who wishes he would've stayed home"  Bob Dylan 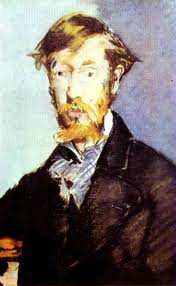 In 1903, the year "Home Sickness"  was first published, St Patrick's Day was made a public holiday (it was done to encourage temperance).   The Irish Land Bill was introduced in the British House of Commons.   The University of Dublin first granted degrees to women.      Edward the VII became Emperor of India.    The Ambassadors by Henry James was published.    There were 7,635, 426 people living in the Philippines in 1903 and just over 4,000,000 in Ireland.


Between 1830 and 1914 about five million people moved from Ireland to the United States.    Millions more went to Canada, Australia, New Zealand, Argentina., the islands of the Caribbean, and England.   In 1890, forty percent of the people born in Ireland had moved out of the country.   The historic causes of this massive exit are complex on the one hand and simple on the other.   It all seems to come down the perception that a person's future would greatly improve if he left Ireland.   These massive exits had and still have a massive influence on the literature of Ireland.   Its most famous novelist, James Joyce, and the most important playwright of the 20th century, Samuel Beckett, both spent much of their lives in exile.


People did not in the 19th century and before leave the only life and the ancestral home of their family as far as the mind goes back because they were happy where they were.   Emmigration was born of desperation and also took great courage.   When someone left Ireland, in most cases he or she knew they would never return and never see their loved ones again.   This caused huge emotional pain both in those who left and those who stayed.     Some left with a great sense of adventure, others in great fear and sadness.   Out of these experiences great literature was  born.   All who left Ireland left with a great love for its culture.


George Moore (1852 to 1933-County Mayo, Ireland) is a great short story writer.   I recently read and posted on his story "Albert Nobbs"" which was recently made into an Academy Award nominated moving starring Glenn Close.   I was really amazed by this story of a woman in 19th century Ireland living her life as if she were a man.


Frank O'Connor, the author of the only book on the short story worth reading, says "Home Sickness" is a masterwork and included it in his anthology, Classic Irish Short Stories.   It opens in New York City with an Irish immigrant working in a bar.   He has been out of Ireland for a long time, he is doing OK money wise, is single, and keeps his health up by long walks.   He is feeling somehow despondent and his doctor tells him go back to Ireland for a while and you will come back fine. Three weeks later he is back in Ireland.    He does not seem to have any family left living there but he wants to go back to where he grew up.   He looks everywhere for people he knows and places he recalls.   Everywhere people ask him about life in America.   Can it really be true a man can make $4.00 a day?   Does everyone live in a fancy house?

He ends up taking room and board with someone he once sort of knew and he meets a girl he likes.   At first she is very shy and almost runs from him.   Then he begins to court her and soon the word is out they will be married.   At first the man likes idea of taking her back with him to New York City.   I really do not want to spoil the story for you so I will tell no more of the plot.
"Home Sickness" kind of illustrates the truth of the old saying "you can never go home again".   It is a very emotionally intelligent account of the impact of immigration on both those who go and those who stay.
"Home Sickness"  is a wise, beautifully written short story that I am very glad to have read.


You can find it at Manybooks.


Please consider joining us for Irish Short Story Week Year Two, March 12 to March 22.   All you need do is post on one short story by an Irish author and send me a comment or and e mail and I will include it in the master post at the end of the challenge.

great resources to plunder, thanks.