"The Piper and The Puca" by Douglas Hyde

Pucas, Banshees, and Cailleachas
A Story by the First President of Ireland 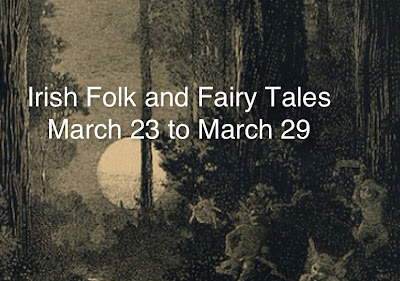 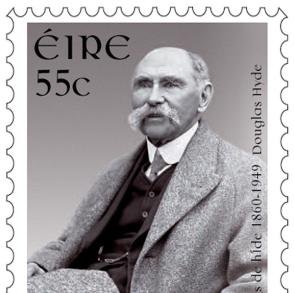 Please consider joining us for Irish Short Story Week Year Two, March 12 to March 31,   All you need do is post on one short story by an Irish author and send me a comment or an e mail and I will include it in the master post at the end of the challenge.

Irish Short Story Week Year Two was scheduled for March 12 to March 22.   I an finding such a richness of material that I have decided to add on a kind of bonus week focused on short stories that deal directly with the folk and fairy tales of old Ireland. (The last two days of the month are open dates).  This decision was prompted by my reading of some of the works in Fairy and Folk Tales of the Irish Peasants by William Butler Yeats.   There are stories about changelings, ghosts, witches, giants, the devil, legendary Kings and Queens from the very old days, and lots of fairy stories.   There is also, of course, a wonderful story about a leprechaun that makes shoes for fairies.   There are stories by William Carleton, Oscar Wilde's mother, and lots  of  authors I have never heard of but whom Yeats says are great writers.   I will be posting on a story or two a day from this collection.   You can download it as I did from Manybooks.

Douglas Hyde (1860 to 1949, Castlerea County, Ireland) is highly praised by William Butler Yeats as one of the leaders in preserving Irish Folk Tales and in the translation of the stories from Gaelic to English.   In  so doing, Yeats tells us he showed great literary skill and really did a lot to preserve old traditions.   The anthology collected by Yeats was first published in 1888 when Hyde was 28.   When I checked the Wikipedia article on him, it said he was the first President of Ireland (1938 to 1945).   At first I thought OK there must be two Douglas Hydes but in fact Hyde did go from young folklorist and academic to president of Ireland fifty three years after this story was published.  (If you want to found out how this happened, it is very interesting, you read find out here.)

There are more creatures in the Irish Night than just fairies and leprechauns.   There are puca which are animal spirits.  They can take many animal embodiments  but mostly commonly take the form of a horse, perhaps a horse with horns, wings or blazing red eyes.   Banshees are spirits, perhaps of the fairy class, whose primary function seems to be to grieve for the dead.   Caillleacheas, a less common term, I think, are old women, perhaps witches but certainly with some minor black magic powers.  They like to gather in large groups at night.

As the story opens we meet a man who lives in Dunmore with his mother.  He is described as "half a fool", he is a very good flute player but has never learned more than one song, "The Black Rogue".  One day as he was crossing over a bridge, pucas and such like to hide under bridges,a puca in the form of a horned horse takes him and flings him on his back and tells him they are going to the house of a local banshee where there is a large party going on for all the local Caillleacheas.   The puca tells him that if he does a good job playing they will reward him with lots of gold coins and may even bring him to full intelligence.

What happens next is fun and interesting and fully in the tradition of the tricks of the folks from the spirit world.  I will leave the rest of the plot unspoiled.  You can download the full Folk and Fairy Tales of the Irish from Manybooks.

I'm not surprised that you found yourself expanding this segment of your event; I only just dipped my toe into it myself and found I'm added a dozen books to my TBR shelves, all inspired by one little ol' volume of fairy tales on my shelves.

Buried in print. For sure this is a very rich reading area