Please consider joining us for Irish Short Story Week Year Two, March 12 to March 22.   All you need do is post on one short story by an Irish author and send me a comment or an e mail and I will include it in the master post at the end of the challenge.

In 1927 the first Greyhound track in Ireland opens.   The first transatlantic telephone call is made.   Great Britain renames the United Kingdom of Great Britain and Ireland to The United Kingdom of Great Britain and Northern Ireland, acknowledging that the rest of Ireland is no longer under British rule. The first Volvo is made.  To the Lighthouse is published.   Charles Lindbergh makes the first nonstop flight across the Atlantic.   Kevin O'Higgins, the Vice President of the Irish Free State, was assassinated.   The first Japanese train line opens, in Tokyo.


Liam O'Flaherty (1897 to 1984) was born in Inishmore on one of the Aran Islands, off the west coast of Ireland.  His cousin was the famous Hollywood movie director  John Ford.    Like Frank O'Conner and Sean O'Faolain he was involved in the Irish War for independence against the British (largely a guerrilla war)1919 to 1921.    It was a bloody war of brother against brother in many cases.   It ended in Southern Ireland becoming an independent country with largely Protestant Northern Ireland staying under British rule.

O'Flaherty worked for a time as a teacher until he became successful with novels like The Informer (which his cousin made into a movie) .     O'Flaherty moved the USA around 1923 to live in Hollywood so he could work with his cousin, among other reasons.   He was for a time a communist but returned to his Roman Catholic roots in latter years.   He had an affair with Elizabeth Bowen.    He was deeply into the reading life with a passion for French and Russian literature.    Much of his adult life was lived in the USA, his  writings nearly all deal with Ireland.

In the first story I posted on for Irish Short Story Week, "Home Sickness" by George Moore, we are given a look at what happens when an Irishman living for many years in New York City attempts to return home.   In "Going into Exile" O'Flaherty shows us the emotional consequences that emigration had on those left behind.

The story opens in the crowded cabin of Patrick O'Flaherty.   There are lots of people there for a party in honor of the two oldest of eight children both of whom are leaving for America in the morning.

"The people were dancing and laughing, and singing with a certain forced and boisterous gaiety that failed to hide from them the real cause of their being there, dancing and singing and laughing.  For the dance was on account of Patrick Fenney's two children, Mary and Michael, who were going to the United States on the following morning".

There seems to me a lot of very understandable forced gaiety in the short stories of Ireland. 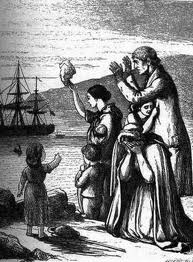 Fenney knows that in the morning he will lose his two oldest children and he will likely never see them again.   He has  too many other children for them all to go and very few people ever return.     This is a very sad, near heart  breaking story.   In  one very powerful scene, Fenney and his son Michael go for a walk together.   Neither really knows what to say.   Michael is wearing the suit bought for him to wear on the trip.    He feels awkward in it as it is the first clothing he has worn that was not homespun.   Michael tells his father he will soon be able to repay the passage money and will be able to send the family money by Christmas.   Just as the father begins to give into his deep sadness and break down, he catches himself and tells his son not to become impudent just because he has a new suit of clothes.

"They  stood in silence fully five minutes.   Each hungered to embrace the other, to cry, to beat the air, to scream with an excess of sorrow.   But they stood silent and sombre, like nature about them, hugging their woe".

Mrs. Fenney is keeping as active as she can, urging the guests to eat as much as they want from the ample food that has been prepared.   Having enough food was a constant source of anxiety to many.     Mary Fenney had lots of same age, early 20s or late teens, friends and a dozen of them were all huddled in the bedroom with Mary.   Mary

"Kept thinking of the United States, and one moment with fear and loathing, and next with desire and longing.   Other things troubled her,things of which she was half ashamed, half afraid, thoughts of love and foreign men and clothes and of houses where there were more than three rooms and where people ate meat everyday".

Mary's mother is laughing too much at the party, almost hysterically which Mary knew a fit of terrible hysterics was coming when the moment came when the mother must deal with the fact that she will never see her children again.      The closing of the story is very emotional and terribly sad.

O' Flaherty in his simply and beautifully written story has captured the terrible pain that emigration caused when families know they will never see each other again.

I read this story in Classic Irish Short Stories edited and introduced by Frank O'Connor.   It is a beautiful work of art.

Hi, Mel! Looks like you've been very busy with the Irish Short Story Week. I've read your posts and they're very enlightening. Will you be featuring Irish women writers as well? As for our joint venture, we could do N. V. M. Gonzales, if that's okay with you. Here's a link to one of his popular short stories - http://books.google.com.ph/books?id=bEwuesGeJwAC&pg=PA15&hl=fil&source=gbs_toc_r&cad=4#v=onepage&q&f=false

Ah, Mr. O'Flaherty is on the list. How interesting that he was John Ford's cousin. Thank you.

Ds. O'Flaherty is a great writer. There are just so many great irish short story writers, past and present

Thanks for this great ininformations can you help me about characters, symbols which writer O'Flaherty use with overall summary and thank you 😊