"The Limerick Gloves" by Maria Edgeworth 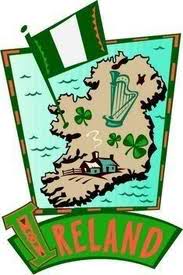 Please consider joining us for Irish Short Story Week Year Two, March 12 to March 31.   All you need do is post on one short story by an Irish author and send me a comment or an e-mail and I will include it in the master post at the end of the challenge. 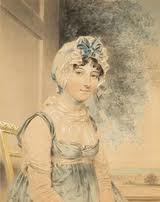 Maria Edgeworth (1768 to 1849) was born in England to Irish parents but returned to Ireland at age 14.  She helped her father manage his estate, took charge of her younger siblings and was taught at home by her father in law, Irish history, science  and literature.   She observed very closely the day to day life of the people from peasant to gentry and also began to correspondent on equal terms with many learned men.   She may have been born in England but her sympathies were with the Irish, she considered her self Irish and William Trevor included "The Limerick Gloves" in his The Oxford Book of Irish Short Stories.   Most of her large literary output is devoted to the interaction of traditional rural Irish with the more modern elements of society and the English.   She was an advocate of women's writers and a supporter of Catholic Emancipation.    She worked very hard during the Potato Famines of 1845 to 1849 to help the poor.

I think of all Edgeworth's work it is for her story "The Purple Jar",which is most read now.  It was on a daring and shocking topic in the early 1800s, a girl's first period, as it was somehow considered shameful for this to happen.  Most girl's received little preparation for this.  (I posted on the story last year during Irish Short Story Year One.)   The father's disgusted reaction is really cruel.


"The Limerick Gloves" is a very funny story (there is no humor in "The Purple Jar") about the prejudices the Irish living in England faced, some of it just jibes and some quite vicious.

The story is set in England.  Mr and Mrs Hill (that is what the couple call each other) are talking about their daughter's new Limerick Gloves and the fact that an Irish Glove maker who seems to be courting their daughter gave her the gloves.   Mr Hill is terribly anti-Irish and the last thing he wants is an Irish son-in-law who obviously has come to his town just so he can blow up the local protestant cathedral.  Mr Hill orders his daughter to remove the gloves at once.   Phoebe outrages her father by saying "But Papa, why should we dislike him because he is an Irishman?  Cannot an Irishman be a good man".


The father begins to investigate the Irishman.   Every report he gets says he is a very good man, helps the poor and is dedicated to his parents plus he has some good honest money.  If he were an Englishman, Mr Hill would be thrilled by the match.

Mr Hill finds a way to get Mr O'Neill arrested for a dubious debt and is even madder when he at once is released.  I will tell no more of the story other than to say at end of the story both men are the best friends.


"The Purple Jar" is, to me, kind of a historical curio type of story.   "The Limerick Gloves" is really enjoyable to read and quite funny.  It lets us see just how the English looked on the Irish.


A lot of the work of Maria Edgeworth can be found on Manybooks.

Another fantastic writer that is featured in that wonderful Anthology, that turns out to be a great resource for Irish Lit. here's my take on it.
http://parrishlantern.blogspot.co.uk/2012/03/oxford-book-of-irish-short-stories-ed.html

I haven't heard of this author, but I'm glad you introduced me. I'll have to look into her work. Recently I read The Awakening by Chopin and it was fun to read a novel by a woman about infidelity in a time when women didn't talk about it. I'm curious about her story about a girl getting a period. In today's TMI world that isn't shocking anymore, but I would love to read her take on it. Thanks! I'm adding her name to my TBR.