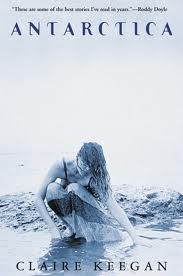 Antarctica is Claire Keegan's first collection of short stories.  Keegan was born in 1968 in County Wicklow.   She has an MA in creative writing.  She has won numerous prizes for her short stories.  She lives in rural Ireland and is a very highly regarded teacher at short story workshops.


"Antarctica"  is the title story in the collection.    It is really an amazing story.   It is about a woman who decides she wants to find out what it would be like to have sex with a man other than her husband so she calmly and coldly makes up an excuse to be out of the house for the night (business takes her away) and picks up a man beneath her in social status, goes back to his house and spends the night with him.  The tone of the story is dead pan still but you know something terrible is going to happen to this woman and you are for sure right.  I will not any more as it is such a strong ending.  I will say that male readers of this story whose wives have cheated on them might relish the ending a bit to much.  It is a kind of precautionary tale for the straying wife.


"Love in the Tall Grass" is another story about marital infidelity.   This is a story about a single woman, Cordelia, who has a very long affair with a married Doctor.  The doctor has a strong sexual fixation on the woman and she is deeply in love with him, or as much as her damaged soul allows her to be.  Cordelia and the doctor can spend only stolen time together, often having sex among the tall grasses.  Circumstances force the doctor to tell her they must split up but Cordelia extracts a time and place for a meet ten years from now.  The language of the story is wonderful.   Cordelia begins a terrible downward spiral and completely cuts her self from all human contact.  She never goes outside.  We do not know how but she has the money to pay to have everything she needs left at her door.  When the date comes there is a really wicked double deception. "Love in the Tall Grass" is a great story.

"Ride If You Dare" is also about a woman cheating on her husband.  We do seem to have a trend here!  It helps in appreciating this story set in the coastal regions of Mississippi in the United States to know that Keegan spent some time in Louisiana, right next to Mississippi.  I know enough about this region of America (here in the Philippines we call it Bubba Gump land) to appreciate the little details that make this story such a pleasure to read.  I really liked it a lot when I saw the mention of Tobassco sauce!   The story is about a man who placed an ad in a newspaper "woman wanted" and the married very attractive well dressed woman who responded to his ad.  They meet for the first time in a seafront restaurant up on stills.  I really wanted some fried shrimp with hush puppies to go with this story.   Keegan puts an awful lot in a few pages and this was a great story.   Keegan leaves out the right things so we have to decide for ourselves why the woman is ready to cheat on her husband with a random stranger.  This is a great story.


"Sisters" is the longest story in Antarctica.   Betty and Louise are two seemingly very different sisters..   Louise married pretty well and went of to the big city to live and have some kids.   Betty stayed behind to take care of their widowed father and when he died she stayed on and took care of the farm.   The father always showed more affection for Louise, pretty much taking Betty for granted.  Betty gave up the chance for a husband and family, she was after all the plain sister.    Ever year Betty, her husband and their kids come for a visit.   This year Louise says her husband cannot come do to work issues.   As the story unfolds we see a life time of being taken advantage off come unraveled.   This story is real a small masterwork of subdued emotion.


"Passport Soup" almost hurts to read as it is so close to the bone.   It is about a couple whose daughter is missing, seemingly having been lured away by a stranger.   The wife blames the husband for making her vulnerable to the words of a stranger by filling her head with fairy tales, a direct stab at much of Irish culture. The wife is out every night looking for their daughter, the husband stays home hoping she will come back.   The story brilliantly portrays the horrible consequences this has for the relationship of the couple.   It is hard to see how it could survive the horrible ending but the man thinks it might.


"Close to the Waters Edge" is another very good story.   Like all the others it is about, in part, a less than perfect marriage.  It also spans two generations.   It is set in the USA, starting in Tennessee and ending next to the Atlantic Ocean in Florida with a side trip to Harvard along the way, a lot of ground to cover in eight pages.   It is about two generations of women, both married to brutal uncaring men who they stay with because it is somehow best for them, or so they feel.  In the first generation the family are struggling pig farmers, by the next generation the daughter of the first woman  is married to a wealthy man and living in a condo on the water in Florida.  There is a very interesting tie in concerning the ocean between the generations.   The top Harvard student son is gay and we see how  his step- father consistently bullies him in ways that range from subtle to idiotic.


The other ten stories are all very good.   Since Keegan published this collection she has developed into one of the top short story writers of the world.

Ds  of   Third Story Window    posted on a collection of short stories by Claire Keegan,  Walk the Blue Fields.   I want to quote from her post as what she says is very powerful:  "It has been difficult to think about leprechauns and pots of gold, shamrocks, and fairy circles this week; hard to find something engrossing enough to take one away from thoughts of global disaster. But I did. It is a small volume that I brought back from Ireland last fall--books being my favorite souvenirs--a collection of short stories by a young woman who has won nearly every major Irish literary prize, and whose first book was a Los Angeles Times Book of the Year.     Her name is Claire Keegan and I had never heard of her.   Now, I will not forget it her."    (DS is referring to the terrible Tsunami that hit Japan and elsewhere in March 2011)

Maybe I will be lucky enough to post on Walk Through Blue Fields in 2013 for Irish Short Story Week Year Three.


Please share your experiences with Claire Keegan with us.

Sounds very interesting! I have come across the name, I think, but haven't read anything by Keegan.