Máire T. Robinson- "Even the Sea Dreams of Escape" and Saltier than the Atlantic" 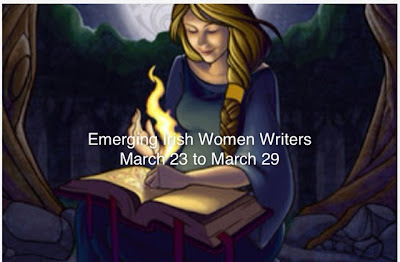 Please consider joining us for Irish Short Story Week, now set to end July 1.  Maire T Robinson  is the seventh  Emerging Irish Woman that has now been featured.  I can only partially predict the future of the book blog world but I bet if somebody does an Irish Short Story Week in 2032 some of these writers will for sure be on the list.  (An explanation for my focus on women writers is here.)  I had at first planned just to make this a one week event but now it will be a recurring motif of Irish Short Story Week Year Two.   I already have three  writers in the que but I am actively seeking recommendations for more.

" Starting over would be easy in America, the land of reinvention, but Ireland was different. She could drive in any direction to the edge of the country, but would never be far enough away to be anonymous. There were no fresh starts in a country where everyone was bound by history, land and blood. "-from "Even the Sea Dreams of Escape". 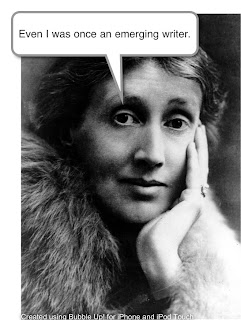 "Even the Sea Dreams of Escape" is about being trapped, not just by your relationships, your job or your need for more money that you really have but by a kind of almost metaphysical  claustrophobia made worse by the knowledge of the many who left Ireland in the times of troubles, some to triumph, some to die but most to struggle on.  On a practical level the story is a about a young woman working through the hard  times brought on by the financial crisis overtaking much of Europe now.  Just a few years ago everything was fine but now people are suffering.  One consequence of this is people who should be doing something much better are forced into mind numbing jobs.  The woman lives with her boyfriend and since he lost his job he is regressing to his days as a college boy, sleeping all day and playing video games.    Once you settle into a job like that, it is too easy just to drift through life accepting this is all you will ever have.

Her only release is running next to the sea.

"Sophie wondered if the sea dreamt of escape. Did it long to be free from the tethers of gravity and the heavy burden of its own mass? She pictured it floating upwards, weightless as it rose. Taking the fish, the whales and the sunken shipwrecks with it. Spiralling, spiralling up into the stratosphere.
In the dream, Sophie was a snake, leaving her skin behind. Newborn and raw, terrified yet...The insistent beep of the alarm clock rang in her ears. Cathal turned on his side, away from her, and grumbled as she hit the palm of her hand on the snooze button. 6:24 warned the red numbers on the clock. She tried to cling to the feeling of the dream, but the greater her effort, the faster it scurried towards the skirting board, like an insect fleeing from the light. The familiar knot of dread returned, her faithful morning companion. Pulling back the covers, she stepped out of bed, the floorboards cold under her feet. She switched the alarm clock off so it wouldn’t wake Cathal when it went off at 6:30. What time did he get up these days anyway? She had no idea. In the shadowy room, she wrapped her dressing gown around her and made her way downstairs."


I will leave the ensuing plot of this marvelous story  unspoiled for you.  The open ended close of the story is  really intriguing.

(I will post a link where you can read this and other stories by Robinson at the end of the post.)

"Saltier Than the Sea" is an example of flash fiction, very brief stories normally less than 500 words.  I am just getting into this now but I can see it takes a lot of talent and energy to tell a good story in such a small space.  ( Lord Dunsanny wrote some great flash fiction.).   Those who lament all literary transitions as times of decline would say Flash Fiction is a result of Twitter and OK I see it a bit.  Not everyone has time to read or write a fifty page George Moore short story. Quick note, there are things that could be said about the sea imagery in her stories, it sense of motion, power, limitless and below this the idea that the sea is where we came from long ago, it contains all of our makeup.  I feel this knowledge in the stories of Robinson.  In writing on flash fiction it is probably not a good idea to write a post longer than the story so I will just be brief as you can read the story in just a minute or two.  "Saltier Than the Sea" deals with the insecurities of a beautiful young woman who cannot understand why the man in her life loves her.   The man wants to somehow  overtake her sadness.  It is also a work which uses the sea as a primordial symbol.

"Even the Sea Dreams of Escape" can be read here.  It first appeared in Horizons, edited by Nuala Ní Chonchúir.


"Saltier Than the Sea" can be read here.  It first appeared in Wordlegs, edited by EM Reapy.


I will more of her work in the future.


Here is her bio


Originally from Dublin, Máire lives in Galway City where she graduated from the MA in Writing at NUIG in 2008. Her short stories have been published in Horizon Review, Crannóg Magazine, Boyne Berries, WOW! Anthology 2010, and Writing4all Anthology: Best of 2009. One of her stories has been translated into Spanish for a forthcoming bloomsday issue of Cuadrivio. Her interests include bad puns, old-man pubs, and a variety of cheeses. She blogs at www.notmuchmore.blogspot.com

Flash fiction has been around a lot longer than Twitter! It started as a movement in America and has gained credence here in the last 5 years or so.

Hi Mel, thanks for including me in your emerging Irish writers series and for your kind comments on my stories I'm really enjoying your posts.