Some Experiences of an Irish R. M. Edith Somerville and Violet Martin

A Week  at  Country House, 1899
as the Guest of
Edith Somerville and Violet Martin 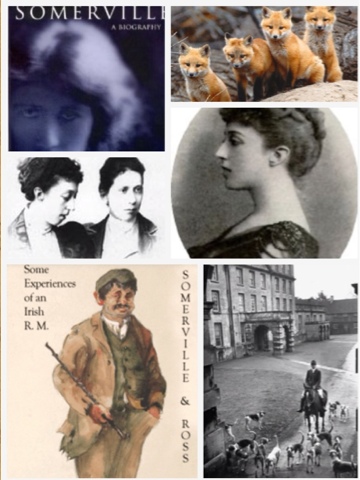 Please consider joining us for Irish Short Story Week Year Two.   Everything you need to participate is on the resources page, including links to 1000s of short stories, from brand new ones to stories now in the public domain.   Guests posts are also welcome.  If you have any suggestions or questions please leave a comment or send me an e-mail.

"The man who accepts a resident magistracy in the south-west of Ireland voluntarily retires into the prehistoric age;  to institute a stable becomes inevitable".

Movies and TV programs have been made of Some Experiences of and Irish R. M. by Edith Somerville and Violet Martin (writing as Martin Ross).  Frank O'Connor says it is one of the most beloved Irish collections of short stories.   He sort of characterized it as a "comfort read", not on the artistic level of George Moore but a lot of fun to read with stories from the heart that can now help us see how things used to be for the Irish Gentry.   I did a search of the book for three terms.  "Horses" occurs 100 times, "foxes" 48 and "hounds" 50.   Those who do not like fox hunting will have to step back from that feeling in reading these stories.   (I am very opposed to animal cruelty and I find fox hunts offensive but in 1899 maybe I would  have been happy to invited to a week of hunting on a great country estate.  Maybe I would have taken pride in my abilities as a horse trader and my ability pick a good hound.)  I have previously posted on a very interesting story by Somerville and Martin, "The Bag Man's Pony" set in an Irish regiment serving in India.  There is a lot to be learned from these stories.

Edith Somerville (1858 to 1949, Corfu) and her second cousin, Violet Martin (1862 to 1915, County Galaway) who wrote under the name Martin Ross collaborated on a number of short stories and novels, mostly about life among the gentry and ordinary people of Ireland.

There are twelve stories in Some Experiences of an Irish R. M.   I will over the next few days posts on all of them, probably in groups of two or three at a time.  The stories really are a lot of fun to read and can give you a lot to think about if you open your mind to the works as more than just fun stories, which they are.   O'Connor said these stories represent a literary style which Ireland turned from as the 20th century got underway but I cannot imagine anyone reading these works and not enjoying them.  My exception to this would be for those who cannot for a while stop being offended by the huge waste of depicted in these stories (I am not sure if the authors had anything deeper than a good story in mind, my guess is they did not) and the social injustice the great hunts depended on to exist. Just have a good time, read the stories and drift back to a past that maybe never quite existed for a while.   There is more depth to these stories than you will at first think.

My first order of business was to Google "R. M."  which stands for Registered Magistrate.   An R.M., no doubt every one the intended first audience of the book knew what that was but I guess the authors  did not plan on someone in Manila 113 years later reading their work on an Ipad and having no clue that an R. M., often a retired British Army Officer, was sort of like a Justice of the Peace who sat in on court hearings and often settled minor disputes.   He was country figure of authority.

"Great Uncle McCarthy" is told in the first person by Mr Sinclair Yeates, new R.M. and soon to marry his beloved Phillipa.  I think one reason Frank O'Connor liked these stories but considered them not first level works is that the people in the stories are by and large well adjusted, pretty happy and not suffering from any terrible form of angst or desperate loneliness.    A lot of Irish short stories have an edge, a dark side, I think this is there in the stories of Edith and Violet but you have to dig for it and if you miss it is OK.  Mr Yeates, he calls himself Major Yeates, R. M., has just found a suitable estate, with several hundred acres of grounds for hunting and a house with not too many holes in the roof.    I think he is perhaps in his 40s but I am not sure.   It takes way longer to get the house ready than he thought.   One of the things you will find in these stories is the treatment of Irish country people as kind of pretending  to be bumpkins while using that as a mask to deal with their social superiors.   We meet the country maid who really runs the house.  The unreliable workers, given to drink.   The first thing that happens to him is that his landlord tells him he has have a horse.  He does not really want one, motor cars are coming in, but he figures it is expected.  As you might guess, there is soon a fox hunt in the course of which we meet the ghost of Great Uncle McCarthy.   This is a really fun story and I think most anyone will enjoy it.

"In The Curranhilty Country" gets us more into the personality of the R. M.  He is not at all Colonel Blimp, he is a thoughtful man who has learned from his life experiences how to view things in a detached almost ironic way.    He does not really want to join a fox hunt but he knows his position requires it.   I am not sure yet what the monetary consequences of being an R. M. are but I think we will learn.   The fun in this story is in the details of the fox hunt and the sharp observations of the narrator.  It really is a lot of fun to read.

There will be four or five more posts related to Some Experiences of an Irish R. M.

Email ThisBlogThis!Share to TwitterShare to FacebookShare to Pinterest
Labels: Irish Short Stories, ISSW2, Some Experiences of an Irish R.M. Ireland

I remember the Tv series, but not fondly, hence never read the stories