"The Priest" by Daniel Corkery 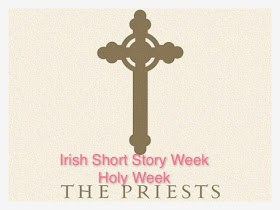 Please consider joining us for Irish Short Story Week Year Two, now  set to run until May 1.   To participate all you need do is to post on one Irish Short story or a related matter and let me know about it.   You are also welcome to guest post.  You need not follow my schedule at all.  I am updating all posts by participants periodically and at the end of the event I will do a master post spotlighting the blogs or writings of each participant and it will have  permanent place on the fixed pages below my header picture.


There is a strong cultural link between the Philippines and Ireland in that both are predominately Catholic countries which have been for long periods been exploited colonies of largely Protestant countries.   In both cases English became the language of the ruling class and in time of most literature.  Priests also play a big part in the day to day lives of the people, especially those in smaller towns.


I have decided in observation of Holy Week to post on four stories about priests, written by Irish Authors.   We will also have our first guest this week.   I will be posting on what Julian Barnes said Frank O'Connor regarded as Anton Chekhov's most Irish of short stories, "The Bishop".  I read this story twice and if you asked me to guess where it was written for sure I would say Ireland.   Chekhov will be traveling to Dublin via schooner, departing in 1902 from St. Petersburg,and will spend the rest of Irish Short Story week in Dublin as the guest of Lord Dunsany.  Our next guest, representing the Irish Americans, will be the very Catholic   Flannery O'Connor.


Daniel Corkery (1878 to 1964-Cork, Ireland) was a teacher at several schools. At the close of his career he was Professor of English at University College Cork where Frank O'Connor and Sean O'Faolain were among his students.  He was active in the Irish language revival movement.   He was also a playwright, wrote a novel, and some cultural works but he is mostly read now for the short stories he wrote about the lives of people in Cork.   He published several collections of short stories in his life.  (I read this story in William Trevor's anthology The Oxford Book of Irish Short Stories.  His work is not yet in the public domain but will, under the laws of Australia at least, soon be.)


"The Priest" is a first rate story about a sixty-two year old priest with a small mostly rural parish.   He somehow feels he never really connected with the people of his parish.   I really could relate to the opening few lines of this story


"Because Father Reen had been reading all day the rain had meant little for him.   Since breakfast time he had not been disturbed, his housekeeper had not even entered, and he had reached an age-he was sixty-two, when a day of unbroken quiet was the best kind of holiday".


This story has an abundance of references to the beauty of the country side and the priests real love for it.   He likes peace and quiet and solitude.   His parish is a pretty good size one so he spends a lot of time on his horse, doing his priestly duties.    His two most important duties after conducting masses are hearing confessions and preforming  last rites.


Father Keen has been informed that one of his parishioners is near death.   The man lives ten miles away, a long horse ride, so he has a lot of time to think about his life and his role as a community priest while on his way.   Father Reen arrives at the home of the dying man.   All of his children, adults now, and his wife are there waiting for him.   Corkery does a very good job of showing us how this feels to the priest, who has done the exact same thing many times before and lets is see how the family acts.   They are in sorrow over their father, a less than perfect man, but their father nevertheless, and they are also concerned over how the property he leaves will be divided up.  They do not want to fight in front of the priest.


"The Priest" lets us see how it might feel to be a 62 year old priest in rural Ireland in 1929.  For sure it took a lot of faith and determination and it was a very lonely life for the very educated priest among the country people.   It lets us see the great sadness in the heart of the priest as he wonders whether or not he has really made a difference in the lives of the people he tends to.


There is another story by Corkery in Frank O'Connor's Classic Irish Short Stories and I hope to post on that during during Irish Short Story Week Year Three which I plan to begin on March 1, 2013.


The next priest story I will post on will be "Death in Jerusalem"  by William Trevor.