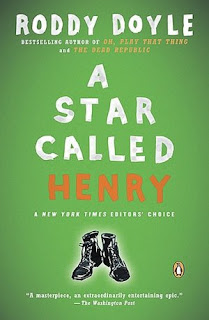 I am looking for suggestions for the best of contemporary Irish novels.   Please share your ideas with us.

A Star Called Henry is the third Roddy Doyle novel I have read in the last two weeks.  Prior to this I read The Woman Who Walked Into Doors and its sequel, Paula Spencer.   I have already started on the second book in The Last Round Up Trilogy and will read the final book right after I finish that.   He is rapidly becoming one of my favorite writers.   All of the trilogy are available as Kindle editions.

A Star Called Henry is the story of Henry Smart up to age twenty.   We are there when he is born in the slums of  Dublin.   His mother is worn out at twenty and his father is the door keeper at a brothel and supplements his income as a professional killer.  This novel gives us  a wonderful feel for what it was like to be in Ireland in the first two decades of the 20th century.   By age 14 he is already a soldier in the recently founded Irish Republican Army.  He sees terrible violence and he kills for money and petty revenge.

There is a fascinating cast of characters in this novel, ranging from the owner of the brothel to a teacher ten years older than Henry that takes his virginity up to Michael Collins himself.   The book is a wonderful work of historical fiction.   I have read some history books on this period in Ireland but I learned a lot more from this book than from them.

This a wonderful novel.   It does contain very graphic sex scenes and lots of violence.   It is told through the eyes of a young man, with almost no education but very street smart.  I loved the character of his book loving granny.

This is a better novel than the two Paula Spencer books, in my opinion, and I liked them both a lot.

I am currently reading the second book in the trilogy, Oh, Play That Thing, and Henry is now in America, starting in New York City and so far he has made his way to Chicago.