Short Stories of the Indian Subcontinent 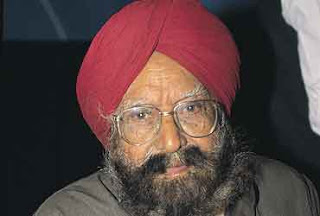 I am very pleased  that The Reading Life was recently recommended by The Economic Times of India,. the leading financial daily of The Subcontinent.
Khushwant Singh


hushwant Singh (1915-Hadali, Khushab, British India-now Pakinstan) is one of the best known Indian writers.  .   He was born into a Sikh family and initially pursued a career as an attorney.    He was driven to begin writing in a reflective often acerbic way about life in the Indian subcontinent by his experiences of the 1947 Partition of India.   He was very traumatized when just prior to the Partition of India he encountered a platoon of soldiers of his faith who boasted to him that they had just completely massacred a  peaceful village of Muslims, men, women and children.    He has published over twenty five books  He would be the first to admit that the very prim and prudish will find some of this work offensive (in fact I think he would be disappointed if it did not offend them) and he has called himself "The dirty old man of Indian Literature".   The "bottom line" (cannot always help myself) is that he has a big thing for the posteriors of women (and maybe teenage girls) at least his works seem to suggest this.   This is a common perception, not just mine.    Some would consider his stories adult.

A short story by the great Indian writer Khuswant Singh is pretty likely to do be very witty, very well written and have acute observations on Indian society as well as the human condition and have a narrator who is obsessed with the posteriors of women.    I think one can safely say that the author is a "bottom man".   His stories are sure, almost calculated to do so, to offend many people with his classification, making use of the ancient Kama Sutra, of women into various types based on the size and shapes of their bottoms.   From these shapes the narrator feels he can project their personality and their behavior during sex.  He says a good Hindu woman, one with a normal size posterior has only a small interest in sex, too big would mean the woman is inclined to sexual excesses and will be easy for anyone to seduce, too small means she will be frigid but if she is a "good Hindu woman"then she will have an average size posterior and she will submit to the advances of her husband.

The action of the story takes place in a high end bar in Mumbai.   A woman, one whose posterior size and shape indicates she is very available to all offers and perhaps a prostitute is drinking at the bar alone, sucking down the double scotches.   A man sends her over and a drink and the bartender tells her he is one of the richest men in the city.   After sending her a few drinks he comes over, he feels she may well go to bed with him to thank him for the drinks or he can just pay her, after all she has the posterior of the Hastine, which means she is "pachydermatous in her proportions:  massive, off-size with a large pumpkin-like bosom, enormous hips and buttocks, expansive thighs and hirsute around the private aspects of  her anatomy.  She has a gargantuan appetite for food, strong liquor and sex".

The ending is really great and the man gets totally put down.

I have previously posted on three of Singh's short stories, "The Bottom-Pincher", and here is a link  My posts on "Karma" and "Portrait of a Lady"

I read this story in Best Indian Short Stories, Vol II, edited by the author.   This and all the other stories in the collection were first published in The Illustrated Weekly of Indian,at one time the premier place in the subcontinent to publish a short story.   I have several other stories by Singh on my Ipad and will read and probably post on all of them.