Please share with us you picks for best contemporary Irish novels 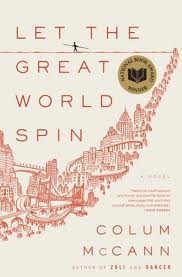 I totally loved Let the Great World Spin by Colum McCann (Dublin, 1965) as has almost everyone else who ever read it.  I do not feel inclined to retell much of the plot of such a well known novel.    The conception is just brilliant and very creative.   It starts out in August 1974 and a tight rope walker is walking on a wire between the Twin Towers of the World Trade center in New York City.   This novel is about some very different people who witnessed the event.   It about so many things.  One of them is a thirty year portrait of New York City.   Maybe it is a love letter to the city but it is by a far from deluded lover who relishes the ugly side of his beloved at least as much as the beautiful side.   It is also a very Irish story, partially centering on two Irish brothers.

We meet and get to know from the inside some very different seeming kind of people all of whom turn out to be connected but you will never see the connections coming in advance.   We meet a mother and daughter from the poorest part of town, both prostitutes.  We meet an Irish monk working among the prostitutes of the  projects and his brother.   We meet a judge and his wife.  Along the way we meet a painter and his girl friend, whose father owns an American car company.   We meet a nursing home nurse we really like.

McCann takes us very deeply into his characters.   There was a car crash scene that was actually so realistic it was painful to read.  Let the Great World Spin makes us see as full human beings people we might dismiss as too unlike us, maybe because they are too poor, too rich or live in too odd a way.

This is a bit of a spoiler, but I really liked it when the took us to 2006 and we meet the daughter of one of the  women who walked the streets of New York City and we find out she attended Yale and now works for a charitable foundation in Little Rock.  It was so masterful how McCann left out the details of how this happened.    When she arrives in Dublin in 2006 I was totally fascinated.

As I said, I loved this book.   It won the USA National book award in 2008 for best fiction, the Amazon book of the year award, the International IMPAC Dublin Literary Award, among many others.

I have previously read and posted on his Zoli, set among European Roma and two of his short stories.   I am restricting my reading now pretty much only to works available as e-books and I have now, sad to say read all of his.   He has another fascinating sounded novel coming out in June 2013, Transatlantic and I have it on pre-order.

Hi there, the December edition of Books You Loved is open for entries. Here is the link Books You Loved December Edition Please do pop by and link in a post about a book you loved. Maybe this one? Cheers

Carole. Thanks for the suggestion. I just posted this novel as you suggested.

Thanks for linking this in. We now have a lovely collection of book links. I have signed up to follow you via Google Reader. A follow back to Carole's Chatter would be wonderful – or are you already following? Cheers

Ps If you would like email reminders of future editions of Books You Loved, just pop by and comment and include your email - I won't publish it - and the reminder will be by bcc so it will remain private