Portrait of a Novel: Henry James and the Making of an American Masterpiece by Michael Gorra 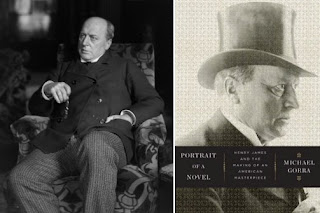 I decided I wanted to read Portrait of a Novel:  Henry James and the Making of an American Masterpiece by Michael Gorra  when I saw that Colm Toibin, who wrote a greatly admired novel based on the London years of Henry James (1843 to 1916-USA), The Master, listed it as one of his top reads for 2012.   He said it was more than just a very close reading of Portrait of a Lady but also a great work of literary biography (one of my favorite genres) and a history of the literary culture of the era.

This is a great book.  Anyone interested in Henry James or American literature will really like this superbly written and documented book.   It is not just a work of literary exegesis, though it does a great job of explaining how the novel works, it is a travelogue of the places in the novel and of James' haunts in Europe.   We meet and learn some very interesting things about Turgenev, Flaubert, Guy de Maupassant and other writers and cultural figures that were new to me.   Gorra deals with the often asked question, never to be really answered, as to whether or not James was gay and if he was a life time celibate.  He explains how James came to be able to create such brilliant realized female characters.

This book is also a great and humbling lesson in how to read a masterpiece.  Gorra also talks about a number of James' other works, he especially admires The Aspern Papers, Washington Square and The Wings of the Dove.   I also was happy to learn of the short stories of James' that Gorra most admires.

Gorra also talks about the place of James in the canon  of the modern novel.  He goes into a lot of details about James' famous family and the economics of his publishing career.  He talks about how James was one of the very first modern writers to deal extensively with the contents of the consciousness of his characters.

Gorra does talk about some of the prior biographical works on James and about other interpreters of his work.  There are about seventy pages of footnotes and documentation.   Gorra does not say anything he cannot back up.

I totally endorse this book to anyone interested in the subject matter.   I do not see it finding many readers who are not already into Henry James but if you have never read James I think Gorra would tell you to start with Daisy Miller.

I hope to read at least The Wings of the Dove and a number of the short stories,in 2013.  I also think I will reread Portrait of a Lady.

Michael Gorra came to Smith in 1985, after getting his A.B. at Amherst and his Ph.D. at Stanford. He works primarily with 19th and 20th century fiction, concentrating on the history and development of novelistic form. His upper-division courses include the Victorian Novel, Modern British Fiction, a class on contemporary fiction called The Novel Now, a 200-level class on William Faulkner, and seminars on George Eliot’s Middlemarch and the work of Henry James. In the Comparative Literature program he has taught classes on travel writing and the 19th century short story. He also teaches a first-year seminar on the 19th century European novel called Ambition and Adultery, and in Fall 2013 will offer a new first-year seminar called Reading the Civil War.

The book sounds very worthwhile for James lovers. It was a nice find, Mel!