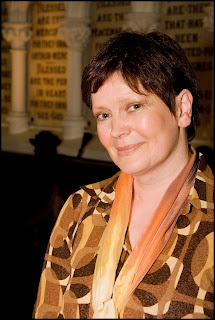 Today I am very honored to present a guest post by Eileen Casey about her experiences at a conference on Life Time Learning with a special focus on using the short story to encourage life time learning The conference took place in Copenhagen and she also shares her first impressions of the city with us. She is involved in projects to promote lifetime self-development for people of all ages. Many people stop reading once they get out of school. I have even read blog posts claiming people over sixty cannot really read "hard" literature. Of course I totally repudiate these ideas and I applaud the efforts of Casey and others to encourage self development programs, with reading at the core.

Eileen Casey is an Irish writer. Originally from the Midlands (Co. Offaly), she has lived in South Dublin County since the late 1970’s. She is a fiction writer, poet and journalist. Her many awards include a Katherine Kavanagh Fellowship (Poetry) and a Sunday Independent, Hennessy Literary Award (Fiction).

A debut short story collection ‘Snow Shoes’ was published by Arlen House, 2012.  She holds a B.A. in Humanities (Hons.) from Dublin City University and completed an M.Phil in Creative Writing at Trinity College, Dublin in 2011 where she was awarded distinction.

Her debut poetry collection Drinking the Colour Blue was published by New Island in 2008.  Collaborative works with Visual Artist Emma Barone  are Reading Hieroglyphs in Unexpected Places (2010) and From Bone to Blossom (2011) with an introduction by Grace Wells.

My great thanks to Eileen Casey for this post on a topic of great importance.  I recently read an article that said one of the best protections against dementia and other mental issues associated with aging is a life time of reading, the more challenging books the better your protection.