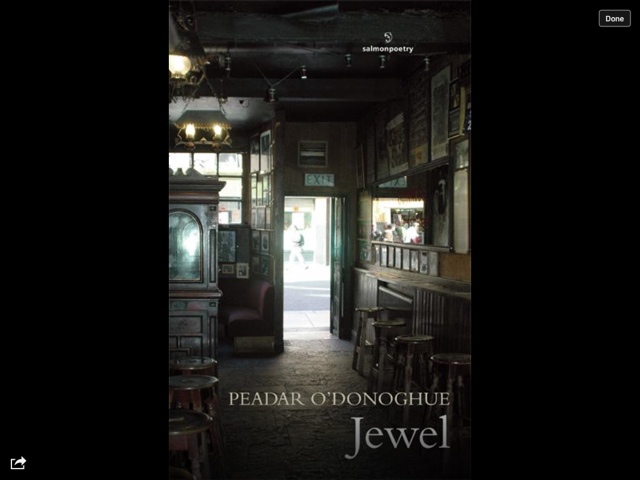 Salmon Poetry is Ireland's leading publisher of poetry and Jewel by Peadar O'Donoghue is their best selling title.   I have no formal training in the technicalities of poetics.   I have read little or no poetry written after W W II.   My poets are Whitman, Yeats, Eliot.  It is not that I have a prejudice against contemporary poetry it is just I had no idea where to start reading.   Just in Ireland blog posts say there are 5000 poets.   I for the last year or so been focusing on Irish literature, mostly novels and short stories.   I was slowly coming to see that perhaps the most intense literary creations in 21th century Ireland is in its poetry.

Here is kind of how see poetry and what I value in a poet.   The public perception of a poet iis that of an acutely observant individual with bonds open in many directions, one seeking to embrace the full range of human experience.   I value poets whose work can take me beyond my comfort zone, stretch the boundaries of my understanding, those not afraid to look at their own demons.  I like interesting uses of language, I like to see expression compacted through allusions, I like to feel high intelligence, and honesty in what I read.   I accept that the best poetry comes from the depths and often is produced from pain and anger.  It is not always "pretty".  O'Donoghue has included a marvelous take off on Wordsworth that counters the impulse to seek beauty first in your poetics.   A soulless moron of a super model might be beautiful but only a fool marries one.

As I see it (and I have repeatedly said I make no claims of expertise) contemporary Irish literature is partially a literature of revolt against Irish romanticism as embodied in Yeats and politicians, in and outside of Ireland, who tried to force the Irish into pre-set roles.  One of these roles is that of the seer, the Orphic visionary.  There is a strong feeling in Irish literature of fighting the image of the Irish as drunken, childlike, over-emotional, hotly tempered, irresponsible by embracing and celebrating in themselves what others have used to abuse them.  Part of this, I have been told I am wrong on this but I hold to it, is the legacy of colonialism.  It is not for nothing that one of Beckett's most famous lines was "fuck life".   The Irish have had a harsh history, of course so have lots of places.   I think the Irish have turned their pain into great literature in part because of their long tradition of believing in education, respect for poets and fiction writers, their strength to face bad times.   Some say the centuries of colonial rule taught the Irish how to act the poetic fool and get over their rulers with verbal pyrotechnics.

"They'll never take the piss out of Dublin"

I read the poems in Jewel several times.  The longest one is three pages.   I found the poems deeply felt and very real.  I also found great anger, almost rage in some of these works.   Dublin inspires deep passion, Irish writers speak of it in hate filled rants but anyone but a fool can see the love behind this.  It is a family quarrel and the opinions of outsiders are not always real welcome.  For sure I see this ambivalence powerfully felt in Jewel.   The lead poem "Jewel" expresses this with its great closing line about a man staggering around Dublin drunk.  The Anna Liffey river is almost sacred to the Irish and there are layers of meaning in this poetry that I am sure go beyond me.

There are numerous references to drinking and being drunk in these poems.  Is the drinking an escape, is it away of over coming the perceived emotional reticence of the Irish, do poets need to be drunk or high to find the courage to express their real feelings.  Death smiles out at us through many of these poems.  O'Donoghue tries to tell death to fuck off or at least check back with him later but he knows Death wins in the end.  Maybe the Irish love of Death is partially rooted in a sense that their oppressors will all be destroyed one day by their companion.   Of the first five poems, three deal with death.

I am going to talk in a bit of a rambling fashion on some of poems to help myself understand them.

"This is a Controlled Poem"

O'Donoghue is a self conscious poet who has thought deeply about what it means to be a poet and this part of what this very interesting poem is about.  It also does deal with the legacy of English domination of Irish literary models of what is good poetry.  I love these lines

"this poem is a Golden Labrador, The Sunday Times
A bay - windowed Victorian semi,
A neatly pressed shirt for the office on Monday".

"The Birth of a Nation" is the longest poem in the collection.  It treats of much of the history of post WWII Ireland.  It also is has layers of death and violence.  The gunman lurks, children are sacrificed to mammon,  Lara Croft rears her lovely head but death trumps her.

In "I am a Crooked Line" we see the brutality and decay of Ireland.  Life is dated from the time "before Tony hung himself".

As I said there is deep rage in these poems.  Some of the anger seems to arise from a deeply felt hatred for the inequities of Irish society.  It can be seen in these powerful lines:

"still I'd like to say 'Fuck you-fuck all of you!'
Eating the gorgeous cake of yourselves,
I'd like to say a million things with nothing,
Because nothing
Is all I desire".

"in the Zone" screams out fuck you to the world, in an amazing compression

"the loneliness of the long distance drinker". (Great title) this poem helps explain the pervasiveness of drinking in Irish literature, whatare people   using it to hide from.?
Pp

"The Price of Love" made me understand something maybe I don't want to admit to myself about my marriage.

"Some men make mistakes,
Some women carry them
For nine months,
Or a life time"

One of the functions of poetry can be to increase self understanding.  Peadar brought me some in these lines.

"Romantic  Ireland Retched and Wrung"  is exactly what I am talking about when I talk about the revolt
Against Irish Romanticism being one of the dominant themes of post Yeats Irish literature.  It is also a very compressed eloquent telling of what Ireland's leading historian, R. F. Foster means when he talks of how all Ireland is being turned into a theme park to make money from tourists.

As I said there are many violent images in these poems.  One poem is entitled "The Man Whose Head Exploded".  In the next poem, "Breakfast Belfast" a man shoots someone who sleeps with his wife.

Much of the drive behind these poems, and perhaps the source of the rage, is a hatred of the soul destroying consequences of poverty.

I read all these poems several times.  I took it with me to a doctor's visit that I knew would be a several hour wait.  I took it with me when I went with my wife to Trinoma Mall in Quezon City.   As your drive
There you will see, if you bother to look,  poverty that would be "world class " in who has the worst poverty world contest.     Inside it is ice cold air, steam bath outside,  and teenage girls in the mall  are embarrassed if their purse costs less than 2000 euros.  The most ironic setting I could find to read Jewel was in one of the five Starbucks.   I  a cup of coffee there, I like the green tea ice Frap, costs more than a day's  wage for a house hold helper who works seven days a week.

These poems did stretch my experiences and took me I to world other than mine, they are beautifully expressed and I am very glad I had the opportunity to read Jewel.  I found these works deeply felt.

Peadar O’Donoghue has had poems published in Poetry Ireland Review, The SHOp, Revival, Bare Hands Poetry, Can Can, and The Burning Bush. He has also published flash fiction in Ink Sweat and Tears. He founded, runs, and edits The Poetry Bus Magazine, an innovative journal of art, fiction and 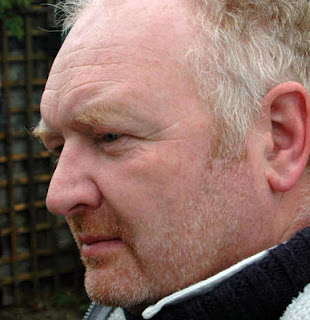 poetry, accompanied by a CD of the poets reading their work. An accomplished photographer, Peadar’s photos have been selected for a solo exhibition at The Signal Art Gallery, Bray and group exhibitions for Wicklow Arts Office and The Mermaid Arts Centre, Bray. They have been published in The Stinging Fly journal (and anthology) and The SHOp, including several front cover. They have also been published in Magma and The Dubliner.

If you Google him, you can find links to him reading his works.