"At that moment I realised what all this was for. The words that this torture and starvation were intended to elicit. We will make you realise how ridiculous it was, the lot of you waving the national flag... We will prove to you that you are nothing but filthy stinking bodies..."   From Human Acts by Han Kang 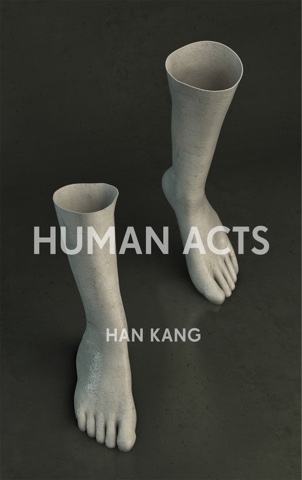 A fascinating article on the challenges she encountered in rendering Human Acts from Korean to English by the translator Deborah Smith,
The-Gwangju-Massacre-1980. Good historical background information
Immediately after finishing The Vegetarian by Han Kang I knew I wanted to read all of her translated works. The Vegetarian is a very powerful, at times viscerally disturbing, account of what happens when, contrary to all social norms, a Korean housewife follows the dictates of a dream and becomes a vegetarian.  To me seeking out more works by an author one had not even heard about until just prior to your initial reading is one of the sincerest affirmations of their work a reader can offer.  I was very glad to find on the webpage of Portobello Books  that the very elegant translator of The Vegetarian, Deborah Smith, now has translated  a second work by Kang, Human Acts. ( I think anyone interested in the process of translation will find the article I linked to just below the cover image very interesting. Translating between languages with no common roots presents more of a challenge than languages rooted in Latin structures.)
As Deborah Smith tells us in her very informative introduction in 1980 South Korea citizens in Gwangju began large scale protests when the dictatorial ruler of the country shut down the universities and curtailed public meetings and what little free speech there was.  As demonstrations expanded the government took violent means to restore order.  Police squads fired into crowds, there are even reports of flame throwers being used on crowds of students.  It is estimated that about 2000 citizens were killed. There were also many arrbritrary arrests and torture was common place. (The article I linked to above on the riots is very useful)
Human Acts is structured so that the reading experience mirrors the chaos, depth of pain and attempt to cope with incredible cruelty by authorities that took place in the lives and soul of the victims of government reprisal on the rioters.  It is not a linear account of the history of the riots but gives us a deeper contact with modern  Korean  history than a traditional non-modernistic novel would.
I find it not easy to relay the power of this work.  I will briefly talk about some of the episodic narrative segments of Human Acts and how I see them in the context of her other novel I have read, The Vegetarian, post World War Two South East Asian history.
The opening segment deals with a fifteen year old boy who has been assigned the duty of watching over the bodies in a temporary morgue set up in a school gymnasium.  In a culture with very old traditions of revering the dead through ancient rituals, the bodies of the riot victims are treated like garbage by the soldiers and police.  In one blood chilling sequence two Korean Army men talk as if it were nothing about how they could follow the example of the Khmer Rouge leaders in nearby Cambodia who killed two million of their own people.  We are forced to wonder what turns people from the same culture as produced the protestors into such monsters.  Human Acts is set in Korea in the 1980s but it reverberated through all of human history for me.  The boy is looking for the body of a friend.  From here the novel goes on to focus on the lifetime impsct the riots had on a diverse group of participants, including the author who was there.
In a fascinsting segment we enter the consciousness of the soul of a man killed in the riots as he looks at tne brutalized remains of others killed in the riots.
We see the impact the riots have had on the psyche, in a very interesting case, of an editor, we have flashed forward thirty five years, who is working on a book on the riots.  We see how the government censors even then would not allow the truth to be told about the riots.  I was very impacted when the long term impact of torture was compared to the lingering impact of the atomic bomb on innocent victims in World War Two.  I do not want to tell to much about the narrative so first time readers can experience the book on their own.
I have only just touched on the themes and power of this work. Kang has masterfully employed the techniques of literary modernism and magic realism to tell this terrible tale.  I think, and this ties in with my remarks on The Vegetarian that we are being forced to look at and reflect on things we push way back in our consciousness which society and those in power and their enforcers remove from our primary field of vision.
Human Acts is about the attempt by modern power structures to destroy very old almost atavistic belief structures.  It is about how the common people are ruled through division, how how an uneducated young boy is given a rifle and a uniform and a flag to wave and comes to think it is his duty to kill other young people.  It is about hiding from and in the deep dark. It is also about the long term deformative  impact of colonialism.
I would suggest you first read The Vegetarian then the more challengingly rendered Human Acts. Both are fascinating compulsively reads.  For Anglophone readers, these works should be your introduction to modern Korean literature. 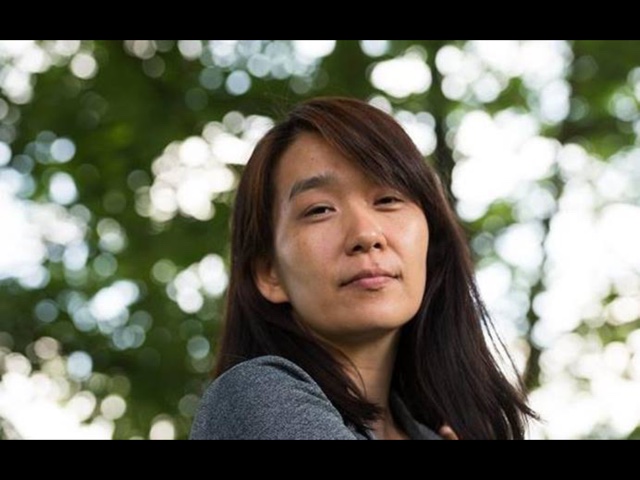 Han Kang was born in Gwangju, South Korea, and moved to Seoul at the age of ten. She studied Korean literature at Yonsei University. Her writing has won the Yi Sang Literary Prize, the Today's Young Artist Award, and the Korean Literature Novel Award. The Vegetarian, her first novel to be translated into English, was published by Portobello Books in 2015, and her second novel to be translated into English, Human Acts, will be published by Portobello in 2016. She currently teaches creative writing at the Seoul Institute of the Arts.  - from the publisher's webpage.
Portobello Books is one of the leading publishers of works in translation, important nonfiction, debut works by promising writers as well as  books by leading contemporary authors, including Nobel and Booker Prize Winners.   In just a few minutes on their very well done webpage I added numerous works to my "to be read" list.
Deborah Smith is a literary translator from the Korean. Her translations include two novels by Han Kang, The Vegetarian and Human Acts (both Portobello, UK; Crown, US), and two by Bae Suah, A Greater Music (Open Letter, 2016) and Recitation (Deep Vellum, 2016). She recently founded Tilted Axis Press, a not-for-profit press focusing on contemporary literary fiction. Tilted Axis's first titles will include a darkly erotic Bengali novella, an obliquely allegorical take on South Korea's social minorities, and a feminist, environmentalist narrative poem from Indonesia, published as a 'sight-impaired-accessible' art book. These will be followed by translations from Thai, Uzbek, and Japanese. She tweets as @londonkoreanist.
I hope more translations of the work of Han Kang are in the works, hopefully in the elegant prose of Deborah Smith.
Mel u