Katherine's Wish by Linda Lappin. 2008 A second reading of a wonderful evocation of the last years of Katherine Mansfield 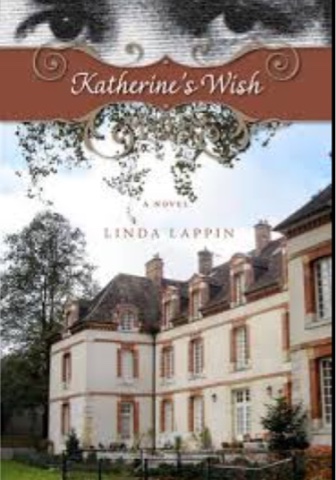 My Q and A Session with Linda Lappin


An excellent Q and A session with Linda Lappin, conducted by Shauna Gilligan, Author of Happiness Comes from Nowhere


My Post on Signatures in Stone by Linda Lappin 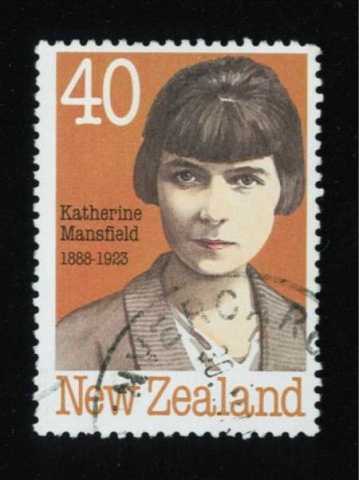 Katherine Mansfield is one of the greatest short story writers of all time.  I was recently deeply impacted by learning the last book Iréne Nemirovsky read before being put on the train to Auschwitz was the Journal of Katherine Mansfield.  I first read Mansfield by a happy accident, her "Miss Brill" was the work of the day on a short story webpage I sometimes look at.  I knew nothing about Mansfield then but I knew I wanted to read more of her work.  I went ion to post on all of the short stories in her four collections. I read Linda Lappin's marvelous novelistic treatment of tne last year's of Mansfield's life and the definitive biography Katherine Mansfield The Story Teller by Kathleen Jones.  I was very proud when the editor of tne bulletin of The Katherine Mansfield Society asked me to contribute an article expanding some tweets on word counts in the stories of Mansfield.  One thing that jumped out was how often the word "home" appeared in her stories, way more than in my comparison works.
Prompted by the publication of the Kindle edition I decided to reread after a five and a half year hiatus Katherine's Wish, Linda Lappin's novel on tne last year's of the life of Mansfield.  In the interim I have  read two additional novels by Lappin and her workbook on creative writing.
I also had the honor of doing a Q and A session with her.
I wondered how would I react to a second reading of Katherine's Wish.  I ended up planning to read it again next year I liked it so much.  Lappin has been reading Mansfield for decades and has clearly a great empathy for her and understanding of her pain, loneliness and of the well springs of her creativity.  Mansfield came from a very wealthy New Zealand family, her  father was chairman of The Bank of New Zealand.  She moved to London ostensibly to study the cello.  This soon fell by the wayside and, supported by a small allowance from her father, Mansfield began to pursue the dream of a literary career.  In the novel Lappin shows how Mansfield searching for the love she never got from her emotionally withdrawn mother and aloof father found numerous sexual partners, men and women.  Her mother even sent her to a spa to be "cured" of lesbian interests through a course of treatment that included being sprayed with cold water by high pressure hoses.  The two primary persons in her life, brought totally to life by Lappin are Mansfield's husband John Middleton Murray and Ida Baker, a friend from childhood.  Ida was totally in love with Mansfield, they had a sexual relationship in high school,so it is hinted.  When we encounter Mansfield Ida  was, Mansfield called her Jones,,was pretty much enthralled by Mansfield, working as an unpaid servant and devoting her self to finding a way for Mansfield, who struggled to live on her allowance from her parsimonious father, remittances from her husband for her work as a book reviewer and small earning from the publications of her stories. 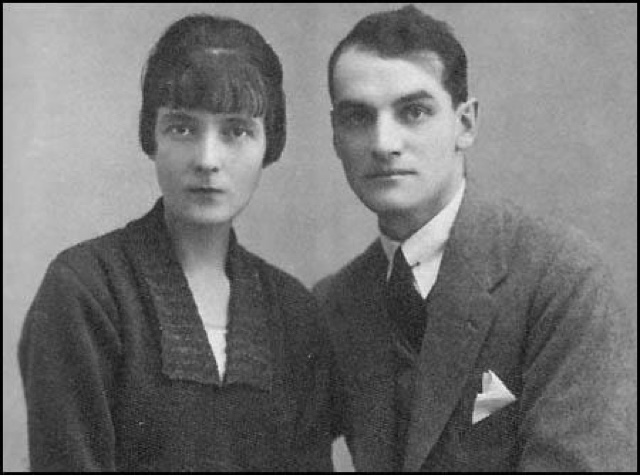 Mansfield and her husband
As Katherine's Wish begins Mansfield is in Italy, deeply impacted by the World War One death of her beloved brother Leslie.  She noticed and tries to hide from Ida, a spot of blood on her handkerchief, a sign of consumption.  We see in the novel that Murray is not the kind of husband a writer needs.  We learn she sometimes wishes her husband treated her the way Leonard Wolfe treated Virginia.  I saw how Mansfield wavered between deep anger toward Murray, who had other relationships, including with friends of her and blaming the other women.  Mansfield had an attraction for guru like men which extended beyond her husband.  The devastation and massive death tolls of tne war created in many a spiritual vacuum that traditional religion could not cure.  Mansfield also knew that she might not have much time left.  One of the few happiest moments in the novels was when Mansfield learned her collection of stories, Bliss was to be published. 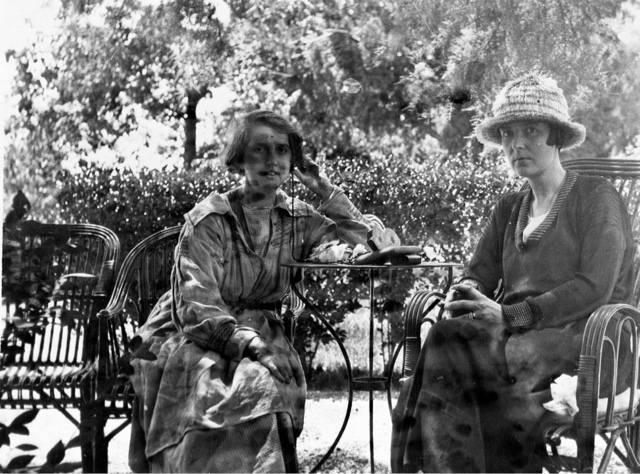 Ida Baker and to her right Katherine Mansfield
We see Mansfield, emotionally and physically dependent on Ida, who she treated at times in a near abusuve fashion, struggle to have secure housing and food.  She is asked to leave a hotel in Italy because her coughing disturbs the other guests.  Her parents come to visit but her father offers her no financial help.  He very much disliked her husband and wished Katherine had never left New Zealand.  The attitude in Italy is very anti-English so at the suggestion of her parents Mansfield and Ida make a perilous journey to a health pension ran by relatives in France.  Throughout Katherine is emotionally buffeted by D. H. Lawrence with whom her and her husband had a complex relationship.
As time goes on and the disease impacts Katherine more, she begins to undergo a very expensive, probably useless and certainly painful course of treatment.
There is just so much to savior in Kathernine Wish, the prose is as exquisite as that of Rosamond  Lehmann at her most elegant, there is lot to be work and  life of Mansfield in this book but there is much more.  Mansfield was an artist of supreme quality who struggled with the wonder and pain of her genius.
Linda Lappin, award-winning poet, novelist, essayist, travel writer, literary translator was born in Kingsport, Tennessee. She received her B.A. from Eckerd College in St. Petersburg, Fla. and her MFA from the University of Iowa Writers Workshop where she studied poetry with Donald Justice, fiction with Ian McEwan, and translation with Daniel Weissbort and worked as a translation assistant to Paul Engle and Hualing Nieh at the International Writing Program.A former Fulbright fellow to Italy, she currently divides her time between the US and Italy, where she has taught English in Italian universities for over twenty years. Her essays , reviews, and short fiction appear regularly in US periodicals. Her short fiction has been broadcast by the BBC World Service Radio. 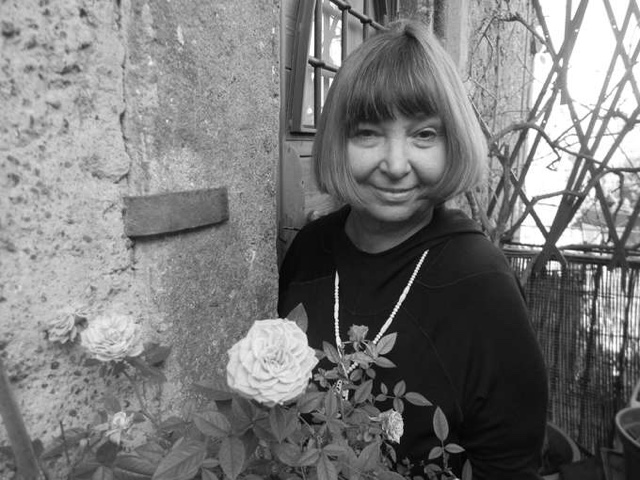 Her first novel,  The Etruscan originally published by Wynkin DeWorde in Galway, Ireland, was runner up in the fiction category for the 2010  New York Book Festival and short listed for the 2011 Next Generation Indie Award in fiction.Her second novel, Katherine's Wish ( published by  Wordcraft of Oregon , 2008) based on the life of New Zealand writer, Katherine Mansfield received the gold medal in historical fiction from the  IPPY awards, and was a finalist for the ForeWord Book of the Year in fiction. Her third novel, a mystery,  Signatures in Stone set in the sculpture garden of Bomarzo the Monster Park published by Pleasure Boat Studio won the 2014 Daphne Du Maurier Award from Romance Writers of America for mystery and and suspense writingActive as literary translator, she has translated Carmelo Samona' and FederigoTozzi. She has received two NEA grants in translation and the Renato Poggioli Award in Translation from PEN.Through the  Centro Pokkoli , she has organized writing workshops in Italy for  the Kenyon Review, the Converse College Continuing Education Program, and other institutions She has worked as a radio speaker and interpreter for RAI 1 and is currently associate international editor for  Del Sol Journal . Her forthcoming books include Genius Loci: A Writer's Guide to Capturing the Soul of Place and Postcards from a Tuscan Interior She is a member of the AWP, the EACWP, the Authors Guild, and the Katherine Mansfield Society
More information can be found on her webpage Lindalappin.net
I strongly endorse Katherine's Wish to all lovers of the novel.  It is must reading for those interested in Mansfield and early twentieth century literary history.
Mel u

Mel, thank you for this reminder! I have a copy of Katherine's Wish, that I won on your blog! I need to unearth it from my formidable TBR stacks, and read it.