Our Crowd The Great Jewish Families of New York by Stephen Birmingham(1967, 412 pages, issued as an E Book 2016 by Open Media Publishing) 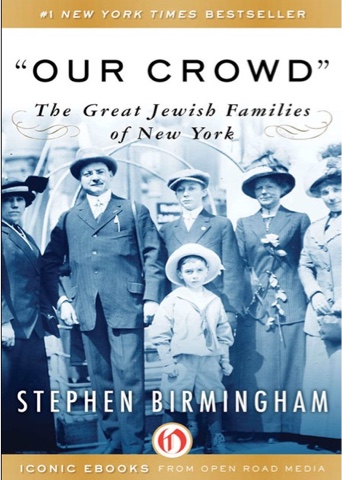 Our Crowd The Great Jewish Families of New York by Stephen Birmingham elegantly and fascinatingly  tells the story of how  German Jewish immigrants who came to America starting in the 1840s or so with little more than the clothes they wore and a bit of money if they were lucky ended up founding financial and retail empires that shaped the development of the nation. This book is not just the story of how a a few German Jewish immigrants got wealthy in America, it is very much the story of the development of America into an International financial power.  This book should be read by all into American history and of course Jewish history, and for sure by all teachers of American history.

The story begins on a boat to America.  German Jews were subject to many restrictive laws, for example in most cases they could not own farm land.  Many men supported their families as traveling peddlers.  When they arrived in America, through the New York port, the founders of great families became traveling peddlers, carrying heavy packs of goods to families in places where there were no stores.   Immigrants began to spread out around the country, as they prospered they bought wagons and set up stores.  One of the big goals of the men, who in most cases came alone to America, was to bring their wives over, then all of their extended family.  The extended family was then used to open branch stores all over the country.  One of the first big successes of a family came when they had the foresight to set up a store in San Francisco as soon as the gold rush began.  The story of how two members of a family made it from New York City to California and set up shop was very exciting.

Soon some  families had enough capital to set up merchant banks, dealing in government bonds, financing railroads, entering into partnership with the Rothchilds and J. P. Morgan.  As the families became very rich they became very clannish, marriage could be sanctioned only with some one from "Our Crowd".  I was fascinated to learn that if no suitable bride could be found among the families, a young man would go back to Germany in search of a suitable wife from among wealthy German Jewish families.  The wealthier the families became, one would have to say tne more elitist became their  attitudes.  The grandson of a traveling peddler would not deign to dine with the owner of a huge store.

There is a lot to be learned about the history of American finance from this book.  The banks of the families were heavily involved in development of American railroads.  We meet a lot of interesting people in this book.  I was so intrigued when I learned that a family bank helped the Japanese finance their defeat of Russia in the Russian Japanese war.  This defeat helped cause tne eventual collapse of Czarist rule in Russia.  In a kind of deep irony, we can see this as payback for the vicious anti-Semticism and pograms of Czarist Russia.

At first most Jewish immigrants to New York City were Germans, as time went on many thousands of Russian, Yiddish speaking Jews began to arrive.  I have read in the works of Joseph Roth, Iréne Nemirovsky, Stefan Zweig and numerous Jewish histories of the very mixed attitude of commonly called European Jews from Germany and the old Austro-Hungarian Empire toward largely Polish and Russian Jews, some times referred to as "Yids". The families felt an obligation to help them but they also did not want "real Americans" to see them as related to the Russian immigrants.  By the time the Russians took over the tenements of New York, the families were in grand mansions on Long Island.

As time went on, most male family members stayed in the business,  women married others in "Our Crowd".  Big families were the norm.  Jobs were often found for in laws as well.

There is a lot more in this wonderful book.   It reads like an exciting novel, with the immigrants brought vividly to life.  Our Crowd The  Great Jewish Families of New York City is an very  informative book.  For fiction readers, I think it will help us understand the many literary works set in New York City by writers like Edith Wharton, Henry James, and numerous others.  I see it as must reading for those into the economic and social history of America and for sure for those interested in Jewish history.

I was kindly given a review copy of this book by Open Road Media Publishing.

I hope to read this year Biringham's The Rest of Us The Rise of America's Eastern European Jews.

Stephen Birmingham is an American author of more than thirty books. Born in Hartford, Connecticut, in 1932, he graduated from Williams College in 1953 and taught writing at the University of Cincinnati. Birmingham’s work focuses on the upper class in America. He’s written about the African American elite in Certain People and prominent Jewish society in Our Crowd: The Great Jewish Families of New York, The Grandees: The Story of America’s Sephardic Elite, and The Rest of Us: The Rise of America’s Eastern European Jews. His work also encompasses several novels including The Auerbach Will, The LeBaron Secret, Shades of Fortune, and The Rothman Scandal, and other nonfiction titles such as California Rich, The Grandes Dames, and Life at the Dakota: New York’s Most Unusual Address. Birmingham lives in southwest Ohio.  - official bio