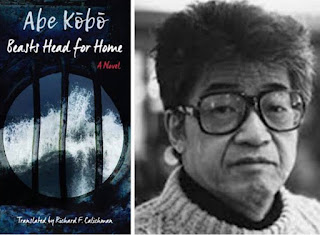 1.  "The Children" by Junichiro Tanazaki
2. Beasts on the Way Home by Kobe Abe

Japanese novels. Kenzaburo Oe said Abe should have been given a Nobel Prize instead of him.  In addition to this I have read and greatly enjoyed in past Japanese Literature Challenges reading his

The Ark Sakura and The Face of Another.  All these novels have elements of surrealism whereas the written earlier Beasts on the Way Home is a realistic work, drawing on his childhood in Manchuria.  (There is some biographical data on Abe in my prior posts and the Wikipedia article is decent.) Abe enrolled in medical school to avoid being drafted into the Japanese Army.  He received an M.D. but never practiced.  He did say all his friends with liberal arts degrees died in the war.

Beasts on the Way Home is set in Manchuria, right after the defeat of Japan.  All Japanese have to leave the place they viciously ruled for over a decade.  A young   Japanese man is trying desperately to cross Manchuria to make it to a port from which he can catch a ship for Japan.  He is crossing a war ravaged territory, where the Chinese hate the Japanese.  He teams up with another Japanese youth and they begin a nightmare journey.  They face robbers, wild bands of homeless dogs, Chinese soldiers and near starvation.  The narration is very suspenseful and totally believable.

Those new to Japanese literature for sure should first read Woman of the Dunes.  Then study his other works to see if you wish to proceed on.  Those into Japanese WWII literature should add Beasts on the Way Home to their list.

I have only read The Woman in the Dunes by Abe; I'll look for this one.

I'm always fascinated by Oe's thoughts that the Nobel should have gone to Abe. I'm not so sure about that, myself. Oe's books are very powerful to me. But, I do need to read more of Abe.

Thank you for this review, which I am now going to add to the site.

I agree Oe is more powerful. But for sure Abe part of the Japanese canon.

I'm always fascinated when an artist or craftsperson testifies that someone else should have received an honour they received instead; it makes me want to explore each person's work more thoroughly to see if there is some quiet connection (inspiration, or echoes, or something - nothing untoward). Here, I haven't read either writer's fiction, but both names are on my list to explore.

Buried in Print. I have read all the translated Oe. He is one of my all time favorite writers. Abe, for sure start with the Woman in the Dunes.

Why not consider participating in Dolce'S Japanese Literature Challenge?