The Occupation Trilogy by Patrick Modiano 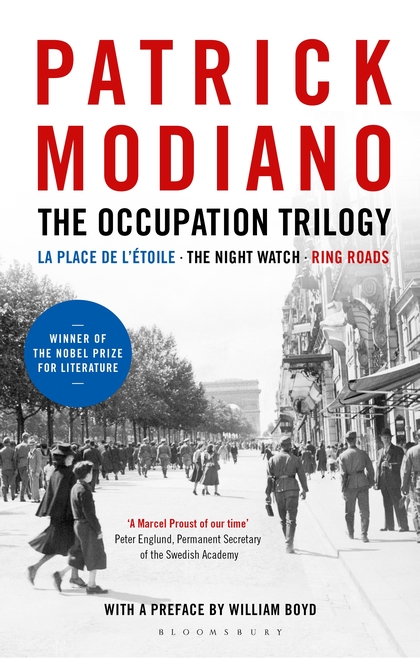 
1.  Colette- Two Early Short Stories
2. The Black Notebook by Patrick Modiano
3. "A Duel" by Guy de Maupassant ( A Franco-Prussian War Story)
4. Life, Death, and Betrayal at The Hotel Ritz in Paris by Tilar Mazzeo (non fiction)
5. How the French Invented Love by Marilyn Yolem (literary history)
6. "The Lost Child" by Francois Coppée
7. "The Juggler of Norte Dame" by Anatole France- no post
8. A Very French Christmas- A Collection of the Greatest Holiday Stories of France
9. "The Illustrious Gaudissart" by Honore de Balzac
10. After the Circus by Patrick Modiano
11. "Gaudissart II" by Honore de Balzac
12. 6:41 to Paris by Jean-Phillipe Blondel
13. "Noel" by Irene Nemirovsky
14. Giovanni's Room by James Baldwin

I have now read five novels by Patrick Modiano (born Boulangne-Billancourt, France, 1945).  He is a prolific writer and I hope to read more of his work.  His The Black Notebook and After the Circus are very good novels focusing on the search for hidden history and for identity.  The Occupation Trilogy is a work of a much higher order, a sublimely brilliant almost surreal recreation of what it was like to be a French Jew during the occupation of Paris by the Nazis.  I am currently reading a very well done history, Paris at War-1939 to 1944 by Donald Drake, which helps me understand what it was like in Paris during the war years.  Many Parisians were convinced the Germans would win, there was a strong element of anti-Jewish feeling, underlying this was a growing resistance as the war went on and the German Occupation began harsher and the prevailing mood was shifting to the idea that the allies could win.

Modiano was 22 when La Place de l'Ėtiole was published.  I found it an incredibly powerful work, deeply evocative of French literature, Proust is clearly a great influence on this work and he is attacked by the Germans and French collaborators as the epitome of "degenerate literature".  This work has a strongly hallucinatory quality.  Paris became a kind of play pen for the worst of German officers.  The French were drawn between self preservation and patriotism.  There is strong sexual content in La Place de l'Ėtiole.  I read this work last year intending to post on it for Paris in July in 2016 but I was too overwhelmed by the power of this book.

The Night Watch focuses on a young man working for the French Gestapo and simultaneously informing on the French police to the resistance.  We see him torn apart by the forces working on him

Ring Road focuses on a young man looking in war time Paris for his father, a French Jew missing for ten years.  He finds him amidst spies, anti-Semites, and prostitutes.

Prostitutes play a big part in the Occupation Trilogy, a metaphor for how Paris survived.  There are lots of wonderful literary references.

The Occupation Trilogy is, to me, must Reading.  Modiano carries on the great tradition of French literature.

I've only read Modiano's childrens' book - I really must read some of his adult books (I have a couple on my TBR pile, so I have no excuse not to....) but I did read two equally famous writer's this #ParisinJuly Guy de Maupassant and Georges Simenon.

They both also featured prostitutes in their stories - what is it about the French & ladies of the night I wonder?

I'm not familiar with Modiano but I am familiar with Paris, WWII and the occupation and now I must add this to my list. Thanks for the introduction and happy Paris in July!