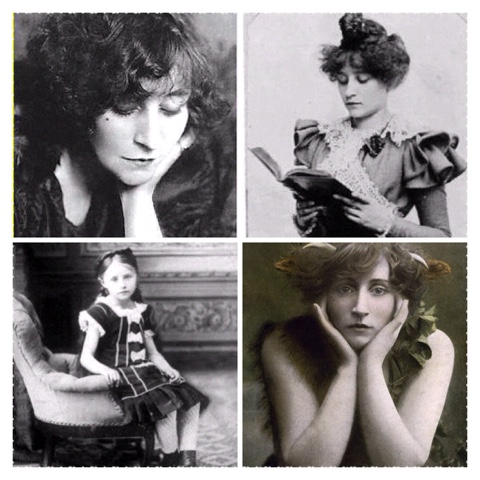 "You will do foolish things, but do them with enthusiasm."  (Sidonie Gabrielle Colette)

"We are blinded to the beauty in our own lives
The hours taken are all that we'll get
For five or six hours in the month of July
The summer I read Collette
I found Paris a hundred years late
Calling it sleeping in (.......)
My ear to the stone I can hear her sing (.......)
I sold my silver to get myself there
To a room with a candle up three flights of stairs
That was the summer I let it all go
Filling my body with my heart and soul

I said this last year and am happy to say it again, if Paris is the City of Love than Colette is her High Priestess.  I also hope to say it again next year.  Colette (1873 to 1954, Sidonie Gabrielle Colette) wrote lots of short stories, novellas and a few novels, mostly set in The Belle Époque Era (1871 to 1914).  She was the first French woman writer to be given a state funeral.  Many draw their
impression of Paris in the glory days from her most famous work, Gigi, or from the movies based upon it.  Much of her work focuses on slightly or more louche men, young and old, and the women of their world.   Colette worked on the stage in a period where preforming as an actress was often seen as part of the demimonde world.  Colette is also a revered GLBT figure for her sensitive and acute perceptive treatment of lesbian relationships as well as for her own very open sexuality.  Ok and she also loved cats!  I highly recommend The Secrets of the Flesh:  A Life of Colette by Judith Thurman, among the very best of literary biographies.

The Collected Stories of Colette edited by Robert Palmer is the best entrance to her short fiction, containing 100 stories, 31 never before translated.  I have both the paperback, a beautiful book, and the recently released digital edition.  If you wish to read the two stories I'm posting upon today, and Palmer's introduction, they are on the Amazon free sample.  The publisher blurb says there is no comparable collection in French.

Today I will post upon two early stories from the series on Clouk, starting with "Clouk Alone".  Clouk is a very archetypical Colette creation, a dandy of indeterminate age, a rich Parisian man boy.

"He was about to turn off the electricity before going up to his room, but stopped short: to get to the light switch he would have to walk past a long mirror, tinged green by the dampness, where he would have time to watch himself walking by, paler than normal, even more of the “poor child” than his fabulously wealthy mother had made him. He does not like to walk past it at certain hours of the night. He prefers to go straight up to the second floor, letting the chandelier and the sconces burn on. Upon waking, he would open his fishlike mouth, which could feign astonishment quite easily, when his inexorable valet would say to him: “Monsieur realizes that Monsieur again left the lights on downstairs. Monsieur won’t wonder why Monsieur’s electric bill is seven hundred francs again this month, worse than a department department store.” Clouk, born a millionaire, remained parsimonious by upbringing: a new car every year is a duty, turning off the electricity when one leaves a room is another."

Clouk misses Lulu, a musical actress and no doubt of the high end demimonde world, she taught him not to be afraid to be alone in his exquisite townhouse.  Suddenly he thinks he hears footsteps in the garden.  He wonders if he dare go look, he summons his valet, who clearly respects him only ironically. The valet asks him what he requires, at first he was going to tell him to look in the garden then he decides to tell him to turn of the lights.  This is a delightful story readable in under five minutes.

As "Clouk's Fling" opens he at a restaurant with a "companion", a not as young or or pretty as she once was actress.  She and Clouk are at a favorite after theater haunt.  Clouk watches the door, Half hoping Half fearing Lulu will enter.  The actress sleeps at Clouk's place, as she often has, Clouk does not like to be alone.  I really feel a need to let Colette's descriptive power shine through:

" The hours after dinner, divided between the restaurant and box seats in a music hall, went by quickly—barely time for a dozen cigarettes—bringing back midnight and the moment to sit down, for the third time since waking, in front of a stiff tablecloth, glazed by the roller, and cold as oilcloth. Each time he sits down at a table in some late-night bar, Clouk feels a warm, fleeting rush of exhilaration.....The best time of their day was the interminable daily toilette, two hours of bath, hairdresser, manicurist, masseuse: the meticulous and listless toilette of cloistered women, the empty chatter, the perplexed fussing with ties and vests . . . Then the brief drive in the car around the already dark Bois, truly an old ladies’ drive, cut short again by the desire, the need to return and sit down at the table of a bar. “Some port and herring sandwiches, right, Clouk? What dried us up like that last night was that nasty demi-sec champagne.”

As the story closes, we see beautifully depicted the routine of Clouk's life, the scenes in the restaurant is so wonderfully done.

My edition does not give the first publication data on these stories but by estimate is 1894 to 1898 period.

I hope to read more Colette