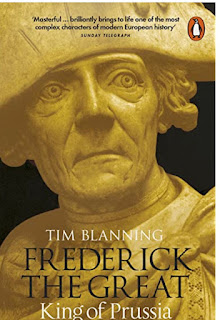 Frederick the Great: King of Prussia by Tim Blanning is a comprehensive biography of the king  who transformed Prussia from one of many small German minor states into a dominant power of Europe.  Frederick created the notion of The all powerful German state that would bring misery on the world long after he was gone.  Frederick came to dominate Europe not just politically and militarily but culturally as well through his extensive patronage of the arts.

If this book has a central aim, it seems to be to establish that Frederick was a life time closeted homosexual who adopted an extreme aggressive military stance, spending much of his time in wars, to prove his father was wrong in thinking him to effeminate to effectively rule.  There is no conclusive proof concerning his sexuality but there is such a wealth of supporting circumstances as to make this credible.  Frederick did of course marry but he was never really interested in his wife beyond that required. We see how Frederick really came into his own when his father died.

Much of the book is devoted to detailing his military campaigns.  There is a very chapter interesting on his devotion to promoting music and the arts, activities his father scorned as unmanly.

Those interested in German history will really enjoy this book.

In a way there is a cruel irony in this narrative.  Frederick the Great's father abused him for being effeminate so he created a model of military domination by a strong leader as the proper role for German leaders that culminates in Nazi Germany, where Frederick was worshiped in a state culture stressing hyperbolic masculinity.

I was given a review copy of this book.

Tim Blanning is the author of a number of major works on eighteenth century Europe, including The Pursuit of Glory : Europe 1648-1815, The Culture of Power and the Power of Culture and Joseph II. He is Emeritus Professor of Modern European History at the University of Cambridge, a Fellow of Sidney Sussex College, Cambridge and a Fellow of the British Academy. His latest book, Frederick the Great, won the British Academy Medal 2016-  from Random House

This must be very good reading for history fans. I did not know the question of his sexuality.

Another interesting read. I find, by reading biographies of historical persons, you also get a bit of the overall history. At least I tend to remember it better this way than reading a history book from school.