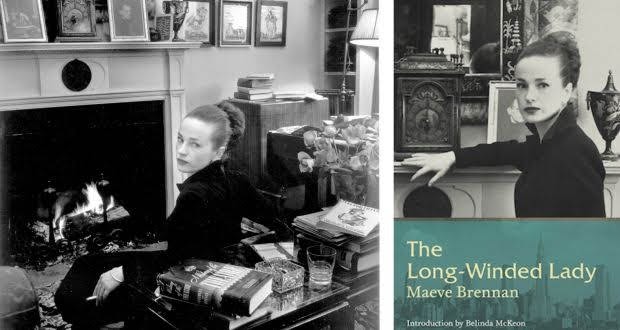 Gateway to Maeve Brennan on The Reading Life

“A feuilleton is best described by what it isn't. It isn't news. It isn't the metro report. The opposite of an editorial, a feuilleton is descriptive, philosophical, meandering and poetically inclined. Though the word is French, the form reached its apogee in fin-de-siècle Vienna. An early master, Alfred Polgar, said, ''Life is too short for literature, too transitory for lingering description . . . too psychopathic for psychology, too fictitious for novels.'” Jeffrey Eugenides

Maeve Brennan's life should have been a fairy tale of one happy and exciting day followed by another.  It was not.

The Long Winded Lady - Notes from The New Yorker is composed of the contents of her 1969 collection of that name plus ten additional works added for the posthumous 1998 edition.

To call them essays seems somehow inappropriate.  Using a word i learned in a café in Vienna in early 1930s, i think they should be described as feuilletons.  Joseph Roth, who would have fallen for Brennan, is a master of this art.  Maybe  the days when such pieces can be published in mass journalism is over.

My main and nearly my only reason for this post is I want Maeve Brennan on The Reading Life, in these dark ignorance worshipping times.

I decided to begin my exploration of collection with a piece entitled “Balzac’s Favourite Food”.  I have been working my way his La Comédie Humaine so this seem a natural starting place.  It is about a visit to a book store,  in the days when book sellers loved books.  Brennan’s elegante prose is just a joy:

“The afternoon was a slow one, and the city was amiable and groggy —no complaints that I could hear. Such a siesta mood is remarkable in New York City and, in the very middle of the city, strange. It was a mysterious occasion and a lighthearted one, as though all the citizens had just been given their seasonal allotment of time and had found that they had enough and to spare —plenty of time, more than they ever would have imagined. In the bookshop, all was calm. You might have been far away, in some much older city, browsing alongside the antiquarians. The pace was intent and unhurried as the customers meandered among the works of Henry James and Rex Stout and Françoise Mallet-Joris and Ivan Turgenev and Agatha Christie and the rest, more and more names turning up in front of my eyes as I stood looking. I had already collected all I intended to buy —five books under my arm —and I was looking through another book, one I cannot remember the name of, and I was reading a description of Balzac’s favorite food. What he liked best was plain bread covered with sardines that he had mashed into a paste and mixed with something. What was it Balzac mixed into his sardine paste? I was just looking back to find out, reading it all again and thinking how delicious it sounded, when my ears were insulted by hard voices screeching right outside the door —people making remarks about the books in the window. “Hey, Marilyn Monroe has been reduced!” a man’s voice shouted. “Five seventy-five to one ninety-two!”

The Long Winded Lady is available as a Kindle for $1.95