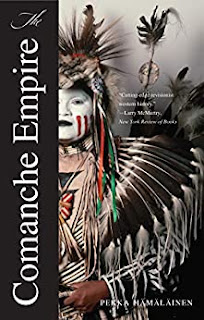 Winner of the 2009 Bancroft Prize

Included in The Lamar Series on Western History

The Comanche Empire by Pekka Hämäläinen is the very epitome of an autodidactic work.   Looking at some of the many laudatory reviews the book has received from experts in Native American history I think a very good sense of the value of this book can be seen in this extract from a review:

“Exhilarating…a pleasure to read…. It is a nuanced account of the complex social, cultural, and biological interactions that the acquisition of the horse unleashed in North America, and a brilliant analysis of a Comanche social formation that dominated the Southern Plains.”—Richard White, author of The Middle Ground: Indians, Empires, and Republics in the Great Lakes Region

This book should be read by anyone who teaches American history.

It is an incredibly informative book.  This book deserves a longer much more detailed post here but perhaps the state of the world now is weighing to much on me to try.

I was flabbergasted by how shallow what is presented on the history of the American west in schools and on TV is shown to be by this book.

The Comanche Empire by Pekka Hämäläinen should actually be read by all into serious history just because it is so well done.

A New History of Indigenous Power

“I am a historian of early and nineteenth-century North America, specialising in indigenous, colonial, imperial, environmental, and borderlands history. I am also interested in comparative and global histories of empires, indigenous and nomadic societies in world history, and the history of the Western Hemisphere in global context. Before coming to Oxford, I taught at Texas A&M University and the University of California, Santa Barbara, and I have been a fellow at the William P. Clements Center in Southwest Studies at the Southern Methodist University, the Helsinki Collegium for Advanced Studies, the Center for Advanced Study in the Behavioral Sciences at Stanford University, and Institut d’Etudes Avancées in Nantes. My 2008 book, The Comanche Empire (Yale), received twelve books awards, including the Bancroft Prize, the Merle Curti Award, and the Caughey Prize and has been translated into Spanish and French. I co-edited, with Benjamin H. Johnson, Major Problems in the History of North American Borderlands (Houghton Mifflin, 2011) and co-authored Liberty, Equality, Power: A History of the American People (Cengage, 2015). My writings have appeared in the American Historical Review, Journal of American History, History and Theory, William and Mary Quarterly, Western Historical Quarterly, and Journal of the Civil War Era. I am is currently the Principal Investigator of a five-year project on nomadic empires in world history, which is funded by the European Research Council.”

This does sound like an essential read. Certainly I learned very little about native peoples in school; what I've learned comes from independent study, like you. I wonder, is the style of this one like a textbook, or is it more accessible for general readers?

Buried in Print. This is very high quality narrative nonfiction. My exposure to native America history in American schools was near nothing. Thd author has a second book on The Lakotas i hope to read next year.