The Men Who Lost America: British Leadership, the American Revolution, and the Fate of the Empire by Andrew Jackson O'Shaughnessy - 2013 - 720 pages 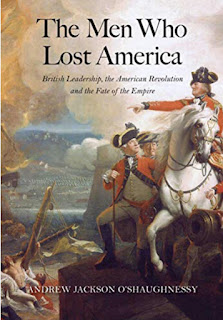 The Men Who Lost America: British Leadership, the American Revolution, and the Fate of the Empire by Andrew Jackson O'Shaughnessy - 2013 - 720 pages

A few months ago, i began another permanent Reading Life Project,Revolutionary Readings devoted to works of non-fiction on the order shattering revolutions of the late 18th and early 19th century in South America, Haiti, France and the United States.

There are hundreds, probably 1000s of books just on the American Revolution.  In school in the long ago pre-internet days I was taught the standard hagiographical account of the American Revolution.  In this  no mention was made of the British military and political leaders other than to denigrate them.  Of course no mention was ever made of slavery or the role of native Americans in the revolution.  No factual account of why slaves were to be counted as 3/5ths of a person was given or why the now ridiculous electoral College system was adapted.   Of course the teachers did not themselves have any real knowledge.

The book is structured as a series of ten interlocking biographies.  Starting with King George III the common view of him as laughably incompetent and later insane is corrected.  Before the onset of his dementia as depicted in the movie, The Madness of King George, he was very knowledgeable about public affairs.  King George was very much against American independence.

Among the other men featured are the Howe Brothers, Lord George Germain,Henry Clinton, General Burgoyne, George Rodney, Charles Earl of Cornwallis, and Jeremey Twitcher the Earl of Sandwich.  Top military positions were relegated to nobility.  Often second sons from noble families had positions  as officers purchased for them.  This was totally the case in the British Navy.  The leaders knew each other socially, often had kinship ties and even married each other’s sisters.

Enough space is devoted to each person to give us a real sense of them.

Many in England, including some of the British leaders, felt the war could not be won.  The supply lines were way to long, England was also fighting against the French in the Caribbean and with other colonial powers in India. The English generals were used to wars fought on open battle fields, not wars of skirmish and in deep woods.  The British lost almost all loyalty in America by the brutal tactics they used in capturing towns.  Also they enlisted Indian tribes who sometimes scalped women and children to turn the scalps in for rewards.  The British did in some very bad decisions fail to follow up on early victories which might have ended the revolution.  They did not anticipate the massive help America would get from the French.  The French navy’s actions in the Caribbean and Indian Oceans nullified the naval advantage of the British.  The author lets us see how the American Revolution was really a world war fought in Europe, India, Gibraltar, Canada as well as in America.

After the war, O'Shaughnessy follows the leaders up until their deaths.  The Generals remained active in the military, they were not shamed or condemned.  Some fought with distinction against Napoleon.

This book will fascinate anyone into the American Revolution.  All teachers of American history should read this book.

Andrew O’Shaughnessy is Vice President of Monticello, the Saunders Director of the Robert H. Smith International Center for Jefferson Studies at the Thomas Jefferson Foundation and Professor of History at the University of Virginia.  He is the author of An Empire Divided: The American Revolution and the British Caribbean (Philadelphia: University of Pennsylvania Press, 2000).  His most recent book The Men Who Lost America: British Leadership, the American Revolution and the Fate of the Empire (New Haven: Yale University Press, 2013) received eight national awards including the New York Historical Society American History Book Prize, the George Washington Book Prize, and the Society of Military History Book Prize.  He is a co-editor of Old World, New World. America and Europe in the Age of Jefferson (Charlottesville: University of Virginia Press, 2010) and a co-editor of the Jeffersonian America series published by the University of Virginia Press.  A Fellow of the Royal Historical Society, he is a member of the editorial board of the Journal of American History.  From https://www.monticello.org/

His  An Empire Divided: The American Revolution and the British Caribbean is on my Amazon Waiting List

The course you are taking and this book sound fascinating; I enjoy reading about American history. I love our country so much, it is good to look back at our roots.

This sounds like a fascinating read. And the way that the story is set up, with ten sections on ten individuals, would invite you to look into the people who intrigue you the most, with full biographies, once you have a broader understanding of some of the events. This is a massive project. Congrats on scratching one massive tome off your TBR though! (720, phew!)

Terra, thanks very much for your comment, an entire College course could be based just on this book

Buried in Print. A very good point, a reader could just Focus on figures most interested in. I Love big long term Reading projects like yiur Mavis Gallant Project.