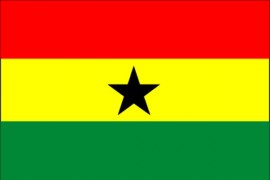 I was happy to see Kinna Reads was hosting the second annual  Ghanaian Literature Week (Nov 14 to Nov 20, 2011).    To me this is just the kind of community building event that makes the world wide book blog community so great.    Kinna has number of excellent reading suggestions on her blog.   All you have to do really is just post on any work of Literature by an author from Ghana and link back to her blog.


For the last two years I have posted on the short stories short listed for the Caine Prize for best short story by an author from Africa.   In 2010 I think I was the only book blogger to post on all of the five short listed stories.   In 2011 the Caine people asked me to post on the final five stories.   I was joined in this endeavor by several other book bloggers, some located in Africa. In 2010 I found one really good story, the prize winner, "Stick Fighting Days" by Olafemi Terry from Sierra Leon.   In 2011 I sadly did not find any first rate stories.   Most of the stories dwelt heavily on the poverty of the people in the stories and treated the people as near cartoon characters.


"Mallam Sile" by Mohammed Naseehu Ali was short listed in 2009 for the Caine Prize.   Of the eleven Caine stories I have read it is clearly in second place.   This is not an insult at all as "Stick Fighting Days" is a brilliant story.   "Mallam Sile" is a much better story than any on the stories short listed in 2011, including the prize winning story.


Mallam Sile is a tea seller with a stand on a market street.   He also sells food.   His place is very humble with just a few seats. Most of his business is take out.   He had opened the shop with money he saved from his job.   He has no family, no wife, no close friends.   The tea shop is his life.   He was a small man, some even suggested he might be partially of Pygmy ancestry.  At forty six he was still a virgin.   He liked women but his short stature kept any women from wanting him for a husband.   Mallam keeps working hard and one day he totally remodels his tea shop to the nicest one in town with lots more places for people to sit down and a concrete floor in place of the old dirt one.   Sile leaves town one weekend and everybody is shocked when he returns.   I will quote a bit from the story so you can get a feel for the prose of Ali.


Sile finally returned one Friday evening, some six weeks after he’d begun work on the shop, flanked by a stern woman who looked to be in her late thirties and was three times larger than the tea seller. The woman, whose name was Abeeba, turned out to be Mallam Sile’s wife. She was tall and massive, with a face as gloomy as that of someone mourning a dead relative. Like her husband, Abeeba said very little to people in or out of the shop. She, too, grinned and waved her huge arms whenever she greeted people, though, unlike the tea seller, she seemed to have something harder lurking behind her cheerful smile. Abeeba carried herself with the grace and confidence of a lioness, and covered her head and part of her face with an Islamic veil, a practice that had been dropped by most of the married women on Zongo Street.

I want to leave the rest of this story unspoiled as I hope others will have the pleasure of reading this story for the first time.  Here is a link to the story

My thanks to Kinna for hosting this event.   I hope a lot of people join in.

You've said just enough to pique my interest. I don't usually enjoy reading stories online, but I might just get over that...momentarily...

Thank you, Mel U. I have not yet read this story. I will do so later in the week. But I can tell that it's funny and well-written. Zongo is traditionally the part of an urban area where people from the predominantly Muslim North migrate to. And they are often the subject of Ali's work, which is wonderful. Thanks for participating in Ghana Literature Week.

another great post and love the idea of this literature week.

So glad you found my blog through the Weekly Blog Hop. I'm looking forward to being a follower of your blog and checking out all your future posts as well!

Parrish Lantern-thanks as always for the comment and visit

Heidi-I am very glad we are now fellow followers

I love that you've been reading all of the Caine Prize short stories, I really should read more of them myself as the ones that I have read have been good. I agree, I really enjoyed this one as well. Last year I read his collection, The Prophet of Zongo Street, and really enjoyed it - I recommend it if you do come across it!