"The Druid" by Frank Delaney

"The Druid" by Frank Delaney (2011, only offered in Kindle format) 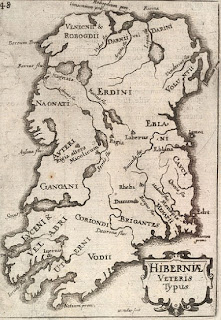 Please consider joining us for Irish Short Story Week Year Two, March 12 to March 31.   All you need do is post on one short story by an Irish author and send me a comment or and e mail and I will include it in the master post at the end of the challenge

"The Druid" by Frank Delaney is a very well done, very entertaining, edifying and thought provoking story that I enjoyed reading a lot.  In places it is very funny.  I will talk about the story a bit but first I want to talk a bit about the extremely interesting introduction that Delaney includes with the story.   It is in fact more interesting than the story, to me anyway.

A lot of those who write about the short story say it is the newest of the literary art forms.   I think it is in fact the oldest of forms and Frank Delaney in his introduction clearly agrees.   There is a good case, it cannot be proved, for thinking there were clear ancestors of the short story afoot in the culture of Ireland in 3200 BC, long  before the Pyramids or Stone Hedge were built, long before the era of Homer or the holy books of India.   I admit I did not know this, one thing I love about blogging is I am constantly learning new things, until yesterday but there is a very large stone structure in Ireland from 3200 BC which was built according to exact mathematical and astrological calculations in such a fashion that on the winter solstice the sun illuminates the central chamber on that day only.    I am referring to The Newgrange Megalithic era structure.   Archaeologists say it took about 300 people working 20 years with stone tools to build this structure.  Dalaney, in a clearly logical and very plausible hypothesis, suggests that there had to have been a story told someone, an ancient King, tribal leader, or the people at large, to lead them to believe that this project was worth doing.  A story teller motivated this project.  I think "short stories" or their ancestors, are at the start of the major religions (this is compatible with believing in these religions) so I think, as does Delaney, that short stories are the oldest literary art form.  To think otherwise you would have to assume that for 20 years 300 people labored to build Newgrange for no reason, likewise the Pyramids and Stonehedge were also done for no reason.   This is older than the Hebrew Bible, the Indian Holy Texts, far older than Homer or any Chinese items.   Little concrete knowledge is really to be found on how the builder of Newgrange lived, they were of course hunter gatherers with maybe some animals and some farming.  For sure making Newgrange was a very big task with only stone tools.   Delaney says there has to be a short story of some kind behind this structure and I totally agree.  The sheer age age of this structure backs up the claim made for the Irish Short Story.   Now to establish a link between the story behind the Newgrange monument and the stories in The Stinging Fly takes a bit of a leap of faith.   You have to assume that stories were passed along, modified, and created for 5000 years or so among the people of Ireland.  In relatively small Island, this does not seem far fetched.  If the roots of the Druids go back far enough, then it is clearly true. 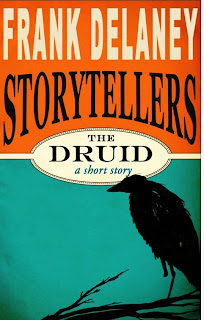 "The Druid" by Frank Delaney (1942, Tipperary, Ireland, author of the best selling Ireland and numerous other novels, all set in Ireland) is really a fun story to read.  It is meant to be a good story, not a groundbreaking modernist work of art and it is not, which is often a good think.  It is the story of a Druid priest, Lem.  Lem became a priest because he figured it was an easy way to make a living, he did not at all believe in any of the tenants of the faith, he in fact thought it all pretty silly.  He was only five foot tall so he knew he would not be good at farming or hunting or fighting so he learned to tell when storms would come and he would lay down on the ground shrieking for the storms to end.  He learned the cycles of the rain and when he figured a rain storm was coming, he would say holy Druid words that were said to bring on the rain.  He trained a pet crow, said to be the form Gods often took, to do tricks for him to fool everyone.  He lived in a fine hut, ate very good food and never did a lick of work.   One day when he is 50 or so he sees a beautiful 19 year old maiden from a good well off family and he decides it would be nice to have a pretty young wife with a big dowry so he works on a Druid based scam to make the girl his bride.   The druid is a master at playing on the fears of the common people and he sets up an elaborate ruse to try to get the parents of the girl to turn her over to him in marriage.  I will leave the rest of the story untold.


If you want to read only the introduction, you should just download the sample from Amazon.   I was provided a free copy of the entire work but even though I enjoyed the story a lot I cannot really say a short story you can read in just a few minutes is worth $4.95 in today's world.


I was also given a copy of his best selling Ireland and I  am looking forward to reading it, hopefully in April.


I offer my great thanks to the Sayajiero Gaelwad Institute for their generous support of The Reading Life.

This sounds fun indeed. I have "Ireland" sitting on my shelves and need to read it.

Sorry, I didn't see your answer. It would be a great idea but I'm not sure I can make it. I have two readalongs in April already towards the end of the month. It would have to be in week two or three. I'll think about about it and let you know before the end of this month if that's alright.

I'm already back. Yes, I can make it if we aim for the week after Easter. Maybe not Easter Monday but the following Tuesday April 10. that would work well. Alos a bit later. But earlier isn't feasible. Let me know what you think and I will the alos already post about this next week.