"No Angel" by Bernie McGill-Ghost Stories in the 21th Century

Please consider joining us for Irish Short Story Week Year Two, March 12 to March 22.   All you need do is post on one short story by an Irish author and send me a comment or an e mail and I will include it in the master post at the end of the event.

I actually only intended to post today on short stories by two acknowledged by all Irish Masters of the paranormal short story, Lord Dunsany and Joseph Sheridan Le Fanu but as I was reading through the short stories in The Best British Short Stories 2011, edited by Nicolas Royle I came upon such a really well done and totally enjoyable story by Bernie McGill, "No Angel" that I decided to post on it also.

McGill was born in Northern Ireland and lives in Portstewart.  Her "No Angel" won second prize in the Sean O'Faolain Short Story Competition and The Michael McLaverty Short Story Award.  Her first novel Butterfly Cabinet, published in 2010, is set on a large country house in Northern Island and is receiving rave reviews.   If it is near as enjoyable and well written a work as "No Angel" I can see why.

I was pretty much hooked on the story from the first paragraph.

The first time I saw my father after he died, I was in the shower, hair plastered with conditioner, when the water shuttered and turned cold.  He was at the sink in front of the misted-up mirror with tap running.  It was two weeks after his funeral.  His things were all where he's left them.

I admit I have seen what I would have for sure thought were ghosts if this was the 18th century and I did not know there were no such things, or at least I am careful who I admit a belief to the contrary to. In another time where it was OK to believe in Ghosts for sure they would be a big part of my life.  The more people the people you love leave this life the more hold Ghosts have on you.   Ghosts are in part a way of dealing with the hold the dead have on us and we on them.    The psychologists would say they are projections of images from dream states (after all they are seen mostly late at night).

Her father did not like the man his daughter is engaged to.  Maybe that is why he is hanging around so he can try to dissuade her from marrying him. 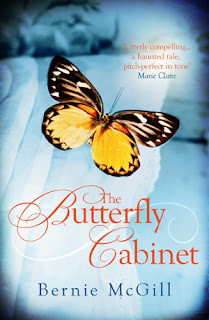 There are some other dead people in the narrator's life, her mother and her brother.  There was always, it seems, kind of a great divide in the family, with her and her father on one side of the rift and her mother and late brother on the other.  They also appear in the story.

I do not want to tell to much of the plot.  One of the things I liked so much about this delightful story was the very calm matter of fact way the narrator dealt with the appearance of the Ghosts and the very normal way they acted.

I think both Le Fanu and Lord Dunsany would like this story.  It is good to know the ghost story is alive and well and still hauntingly beautiful in 21th century Ireland.

There is a very interesting interview with McGill  in which she talks of her background in the theater and her writing career.

Do you have a favorite Irish Ghost Story?

Do you believe in Ghosts?


This story and two of her shorter works can be read on her webpage.

Hi Mel u, an arresting and an immediate opening paragraph. Indeed it hooks. I have not read her story so I shall. I really liked her interview.

Thank you for the story review! I went online and found it, so was able to read it. I'm going to be talking about it too over at my blog. It was surprisingly moving, wasn't it? The best kind of ghost story has melancholy, doesn't it, because of the nature of ghosts always involves death.

I like the Irish setting, and how the background - the troubles, the violence, weaves its way through their lives. A lovely short story. Thank you, Mel! I'm also going to be looking for The Butterfly Cabinet to buy, also :-)

Hi Mel - I just posted about this short story too, I went and read it online right after reading your post about it! Lovely ghost story, isn't it?

Mel, here is my link. I'll come back to read your reviews as soon as I have more time. I'm so glad I particicpated. I found such great stories.
Thank you for hosting this.

Delighted you enjoyed the story, Mel. Thanks for giving it a mention. It looks like I'm in very good company. B

Hi Mel! I've posted my story for Irish Short Story Week at Free Listens. Thanks for hosting this! It's one of the few review memes I participate in and I truly love it.