Writers of Irish short stories pretty much have set the tone for much of the cultural and literary trends of the last 100 years.   Bram Stroker and Joseph Sheridan La Fanu basically started the vampire craze that is still going strong all over the world.   Oscar Wilde helped create a new sensibility, that has opened up an entire new way of looking at the world.    Among Irish short story writers are James Joyce, most important 20th century and beyond novelist, Samuel Beckett the most important 20th century playwright, and William Butler Yeats, for sure the greatest poet of the Twentieth century and for me one of the very greatest of all times.    Stepping down from Mount Parnasssus, we have wonderful writers like my literary love, Elizabeth Bowen to represent the Anglo-Irish.   Joseph Sheridan Le Fanu is considered among the very best writers of Ghost stories.   Not bad for a country just a little bit bigger than the American state of West Virginia and less than one percent the size of Australia.

Irish Short Story Week Year Two will now be open until at least April 31.   All are welcome to join us.   All you need do is to do a post on an Irish Short Story or a related matter (for example a biography of Elizabeth Bowen) and let me know about it.   You are also welcome to do a guest post on my blog.   Just let me know if you are interested in this option.

The most important reason I do periodic updates is to be sure that everyone knows of the truly great posts that the participants in Irish Short Story Week Year Two (yes long week) have done.  If someone is left out of this list it is more oversight and please let me know and I will fix it.   Thanks so much for joining in and plenty of time left.


New Posts since the first update


A Work in Process has done great posts on "The Happy Autumn Fields" by Elizabeth Bowen, this is one of Bowen's WWII stories and is a great cultural treasure.  There is also a very good post on William Trevor's "The Ballroom of Romance".


Vishy's Blog has done a wonderful post on two stories by James Joyce, and one by James Stephens, Elizabeth Bowen and Liam O'Flattery as well as six folk and fairy tales.


Novroz of Polychome Interest, cohost of Indonesian Short Story Week has posted on some of the paranormal folk tales of Thomas Crofton.


ds of Third Story Window has done a very interesting post on  an ancient Irish myth, The Children of Lair.  She will be doing a post on a WWII short story of Elizabeth Bowen also.


I am having a great time with this event, otherwise I would not keep extending it.   Traffic on my blog has reached new highs and The Reading Life is getting some unexpected new attention from outside the book blog world.

I have also been having a lot of fun listening to a wide variety of Irish radio stations the last few weeks.  I use for this on my Ipad (also works on Iphones)  an application called Tune in Radio.  Some stories call for a haunting Celtic lament others for some good old fashioned pub music.


I wish to offer my great gratitude to  the Sayajirao Gaelwad Institute  for their patronage of The Reading Life. 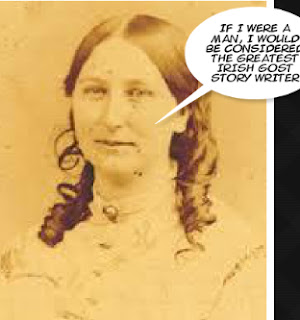 Joseph Sheridan Le Fanu and Elizabeth Bowen will be back along with several real ghost stories from Charlotte Riddell.   Oscar Wilde might stop by also.

Have you seen ER, the medical show?  This is nothing like that.  Details to be revealed as it starts

I still have about 30 short stories from the anthologies of Frank O'Connor, William Trevor and Joseph O'Connor I want to post on.

I have recently found  two anthologies of short stories, flash fiction, and poetry edited by EM Reapy that focus on the work of emerging Irish writers, all very recent works.

This title and it companion volume are both available at a very fair price as a Kindel book on Amazon.

There are lot of online journals where you can find short stories  by emerging and established writers.  For well known writers, check The New Yorker.

If you have any issues, questions, complaints, leave me a comment.

Great short story writers from all over the world may also stop by and say hello during April.

Lord Dunsany will show us how Flash fiction should be done!

Am I reading this right? You will be extending the Irish Short Story Week to April 31? If yes, great!!! I still have a few more Irish short stories up my sleeve.

Nancy-yes it does! there is just so much out there and I am getting lots of interest and inquiries-let us also do a post for our Short Stories of the Philippines next week-

Yes, Mel, sure! That would be great. I have a lot of free time next week because it will be Holy Week.

Mel, perhaps you need to change the name of this to The Irish Short Story Extravaganza?! Read on!

Noooo! I just posted about "The Children of Lir"--sorry it has taken so long (you know, I am slow). So thrilled that you are extending this through April!!!

Sarah-added a link to your great post on "Mysterious Kor", so sorry I left you off

if you posted anything, either as a new participant or an additional post and I did not add it yet, please let let me know, thanks

Hi Mel if you do this next year I think you'd better make it at least a month to fit it all in :~)