The Irish Quarter Year Two
:  A Celebration of the Irish Short Story
March 11 to ? 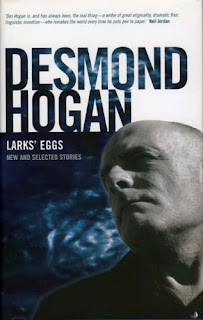 My Posts on Desmond Hogan


Welcome to Day Three of Desmond Hogan Week on The Reading Life.  (There is great  background information  on Hogan in Shauna Gilligan's excellent introductory post.)


"Airedale" was the most recently published story that William Trevor included in his marvelous anthology, The Oxford Book of Irish Short Stories.  This alone almost insures that this is one of Hogan's best known stories.  Like many of his stories, it is about a still young man looking back on his life, reflecting on the forces that made him what he now is.   "Airedale" is a really great story.   I read it last March and loved it then but did not post on it and I read it this March and I read it yesterday (after swimming for a long time in the cool Manila rain).  "Airedale" is really a supreme work of art.   I am losing my inclination to encapsulate plot lines in my posts on the work of Hogan as the narrative is so compressed. 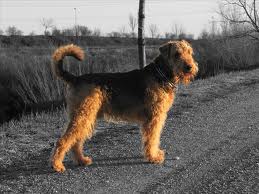 As the story opens our narrator, who seems like he is in his mid twenties to early thirties is recalling his relationship to the family of his friend Denny.   He loved to go over to their house, the story starts in Galway, to escape from his own family.  "I came from a family of five brothers.   There were certain obscenities in my family".   His mother does not approve of Denny even though they are of a good class of people.   She thinks Denny is too wild.   The mother sees something but not that much.   Denny's house is full of all sorts of pets and the king of the animals is Sir Lesley the Airedale.   Denny's mother was Polish and had come to Ireland after surviving a concentration camp in Poland during WWII.   She married an Irish doctor and never wanted to speak Polish again.   Hogan's narrator talks about different families having different languages.

The story also deals forthrightly with the issuing of accepting your sexuality, whatever it might be.   In a very complex and powerful way the character of the mother of Denny and her experiences in the Polish concentration camp keep reverberating through and submerging themselves in the consciousness of the narrator who becomes a successful film maker (it seems of art type films, not Hollywood or Ballywood level).   We go along as the narrator, in the company of Denny spend time in Gay Bars.   (Keep in mind that homosexual acts were not decriminalized until 1999 in Ireland so to openly admit to being Gay was a real act of courage and often brought about total breaks with your family).   On some complex level the conflicts of the narrator in fitting in with what his family wanted him to be with what he felt he was becoming is equated with the concentration camp experience of the woman.   I have to be very careful not to reduce this to over reaction on the part of the narrator to his post adolescent angst, he knows it is not the same but his difference allows him to have a deeper empathy with others of histories outcasts.   This is a great story.   I lack the ability to do it justice.


One of the many masterful ways Hogan packs so much depth of meaning is in his short stories can be seen, I think, by just looking at the title of this story.   When we read or hear it for the first time it might come into our minds as meaning a thief in mourning, a thief who steals from those in mourning, a person whose actions take steal from us our ability to mourn or if we rely on aural primacy as the style of Hogan leads us to, we can see it just as well as about someone who steals in the morning or someone who destroys our pleasure in the morning.   Mourning also leads to the morning of a changed lives for the mourners.   Hogan's prose works its way into us in ways we do not at first understand.   I will talk about it more as I post further on when we can see it in his use of adjectives like "Vatican yellow".   (My lack of knowledge of Irish history makes it hard for me to pin down the time frames of some stories by Hogan and others but I am putting this story in the mid 1960s based on Liam's protests of the war in Vietnam.)  It is largely set in Galway.   It is about a young man, Liam, a very Irish name.   Liam, 23 or so, and married, is going back to visit his very ill probably dying father.   He is an only child.   Liam was a child of his now 83 year old father's old age.   Seeing his father brings to his mind memories of films about Russian winters which became Irish winters and then Russian writers.   When his father sees him he says "Still painting....Well,we never made a policeman out of you".   There is too much in this story to retell the plot and I am not wanting to anyway.   It is very much a story about Irish history and the troubles. Through Liam Hogan shows us how contemporary history shapes our views of our personal history.   It is a cliche, I now know, to say an Irish story captures Irish history in a few pages but "The Mourning Thief" does just that.  It is also a story of a man coming to terms with his own sexuality.  The sexuality of Liam forces him into the role of an outsider, a man hiding something.   His wife accepts his sexual relations with their mutual friend Gerard as it gives her a license to have her own multiple partners.   In fact they bond over her descriptions of her other lovers.


The biggest, and is is a very big weakness, in The Lonely Voice:  A Study of the Short Story, a book I love in spite of our maybe in part, because of its flaws, is Frank O'Connors inability to see that homosexuals are exactly the marginalized  people he says the best short stories are about.

I regard the short stories of Desmond Hogan as world class treasures and will always be grateful to Shauna Gilligan for  leading me to read them.


On day four I will post on two of Hogan's most famous stories, "Caravans" and "Winter Swimmers".   I will also talk a bit about Irish Travellers.  As a point of interest I did a search of Larks' Eggs and Other Stories for the word "travel" and it came up 131 times.  To even begin to understand Hogan one needs to wonder why.  (This is one of the reasons I prefer E books.)  "Home" comes up 132 times, "Death" 68 times.   "Ireland" comes up 100 times, "Galway" 60.


I think this event will be converted to a fortnight or longer as I now want to post on all the stories in the collection.   One of the biggest reasons for my blog existing is that posting on a literary work helps me clarify my understanding of it and increases my ability to recall it.  The last writer I gave such attention to was Katherine Mansfield.

I'm fascinated about the stories you are selecting to write about - The Mourning Thief is, indeed, a beautiful story. I love the way Hogan encapsulates a national history in a personal one. And the fact that have noted that the last writer you gave this much attention to was Katherine Mansfield, a writer whom Hogan himself admires. Many thanks, Mel, for these insights.