"An Occasion for Sin" by John Montague


The Irish Quarter: A Celebration of the Irish Short Story 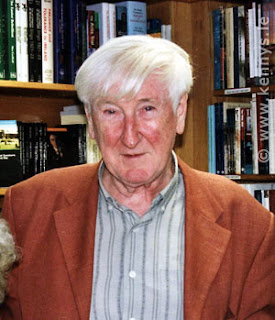 ''The only true madness is loneliness, the monotonous voice in the skull that never stops because never heard.''  John Montague

John Montague, first occupant of the Irish Chair of Poetry, was born in 1927 in New York City to Irish born parents.   His family moved back to Ireland and Montague had a rural Irish upbringing and is now regarded as one of Ireland's greatest living poets.

Have you ever liked a book so much that you kept it on your nightstand, not so you could it in bed but more so you would see it first thing in the morning when you got up?   That is how I feel about The Oxford Book of Irish Short Stories by William Trevor. "Occasion for Sin" by John Montague is included in the collection.

There seems to be a lot more guilt and anxiety about sex in any form in the Irish short story than a sense of its part in the joie de vivre.   This seems to spread itself far and wide.   Love and sexual passion rarely seems to last long or end well.   People seemingly are inculcated with a sense of guilt or sin at any feeling of sexual instinct.  This does not mean there is not plenty of sex in the Irish short story, it just means the people feel guilty about it and a punishment often occurs for the sinner.   An attractive woman  who causes men to look at her not through her own behavior or dress but just by her looks is somehow made to feel she is a sinner.  Even marital sex often seems to be a guilty pleasure and that guilt often ends up poisoning relationships in the stories.   This is what John Montague's great short story, "Occasion for Sin" is, at least in part about.

"Occasion for Sin" is a "Catholic Expression", it is an expression often used by Catholic priests in their homilies (at least here in the Philippines it is-) to mean an event which either involves a physical or a mental sin.    This story is about a French woman married to an Irish man.   The man is gone at work a lot, they have no children and when he buys her an old car she starts going to the beach a lot.   The woman is quite attractive and  French to boot.   It was the custom to change into your bathing suit on the beach while somehow not exposing yourself at all.   At the same time she woman goes to the beach there is a young group of Catholic priests in training (Catholic priests take a vow of celibacy).   They begin to gradually talk to her and become friends with her.   One day a kind of strange seeming man with a bit if of an "off" feel to him reproaches her and says she has caused an occasion of sin in the young priests by causing them to have lustful thoughts.  She never flirted with them or acted in any way not in accord with how a respectable married woman should act, in France at least.   She is very upset over this accusation, talks to her husband about it and ponders for a long time.   She is a Catholic also but remember she is French and that means something exotic to young Irish men.

I see why "Occasion for Sin" is considered a classic short story.   It is a superb work of art that captures much of the guilt of the Irish attitude toward sex.

I would happily read more of Montague's short stories.

Please share your experience of John Montague with us.