"Somerville and Ross-Tragedies of Manors" from Inventing Ireland:  The Literature of the Modern Nation by Declan Kiberd (1995) 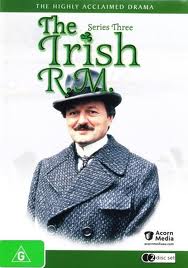 Please consider participating in The Irish Quarter.  All you need do is to post on an Irish short story or a related matter and let me know about it.    Guest posts are very welcome.

I have recently begun slowly working my way through what I think, based on my limited research, is the highest regarded history of modern Irish literature, Imaging Ireland:  The Literature of the Modern Nation by Declan Kibard.  Kibard's book has been praised to the sky by Roy Foster, Edward Said and countless others.   I really appreciate that Kibard treats Irish literature in the context of post-colonial writings.    It is not just a  literary history but places Irish literature squarely on the world stage.   One think that really struck home with me in the context of the Irish Quarter was when he said that the  great longer works of Irish fiction such as Gulliver's Travels, The Life and Opinions of Tristram Shandy, and Ulysses are at least in part narrated as if they were someone telling someone else a story.   To the extent possible I plan to read all of the works referenced by Kibard.   I will also reread the works I read long ago.

When I first began to read the stories of Somervile and Ross (there is some background information on them in my prior posts)  I tried to determine if there is an undercurrent of irony in the manner in which the authors treat the Irish.   It almost seems like they convert them to figures of fun for the amusement of their Irish readers.   Kiberd tells us that "Irish Irelander" refused to read them for decades for this very reason.   There was a popular BBC TV series based on the stories (you can watch a lot of episodes on You Tube-just search for Irish R.M.).  I watched a couple of the episodes and it does appear that the English man who is the R. M. (registered magistrate) and his wife Priscilla are the only sensible people in the programs.  The servants in the story are pure stereotypes.   The popular notion among many modern readers of Somerville and Ross was that they were creating stage-Irish rogues and buffoons for consumption in England.   Kibard teaches us that they were doing something far deeper and more subtle than that, something lost on most of their readers that says a lot about Irish literature as a post colonial experience.    The Irish learned, as did colonized people throughout the British empire that it was often easier and safer for Irish country people to intentionally play the role of Paddy or Biddy as it disarmed their rulers.   The Irish, just as did the Indians, learned that the British who came to live in their countries often had something a bit wrong with them and often felt their own need to play "stage Englishmen" for those they ruled.   Kiberd explains that Somerville and Ross knew what they were doing and when asked to write plays for the Abbey theater in which the Irish were irascible drunken fools they refused.   The work Kiberd talks most about in this chapter is their famous Big House novel, The Real Charlotte.  I downloaded a copy of this and will read it fairly soon and will come back to this chapter in Kiberd again.

As "The Pug Nosed Fox" begins the R. M. has just been given the highly honored position of Deputy M. F. H., deputy master of the fox hunt.   Fox hunting by its very nature was an activity for the rich, which usually meant the Anglo-Irish.   Fox hunting, leaving aside its cruelty to animals, required that very large chucks of land be kept from the production of food, required large resources of meat to feed the dogs and seems in the context of the poverty of the common people to be completely callous.  To the Irish R. M, it is annoying to have been given this position, one he cannot refuse without insulting the Irish gentry who tolerated his authority.  It was a big expense and a lot of trouble and he was not raised to the hunt anyway and his wife did not like fox hunting at all.   This is  very well done story.  Kiberd says no one does a better job detailing the lives of the Irish country gentry, and their servants, than Somerville and Ross.   You really feel like you are along for the fox hunts.   You feel you are bounding along on your favorite horse and you grow impatient with some ill disciplined dogs while admiring others.   I admit I was cheering for the fox to get away.   The ending is a lot of fun.

I can see how these stories would make good TV programs.

This story is in Further Experiences of an Irish R. M. which can be downloaded from Manybooks.

I will be drawing on the thoughts of Kibard often.   He has a very good chapter on Oscar Wilde and I will probably post again on one of his short stories in the light of his teachings   He also has a chapter on Elizabeth Bowen I am looking forward to reading.   I hope my project of reading through the works in his book will increase my understanding of Irish literature.